by Don Robertson
This is Part 4 of my 12-part series on the San Francisco countercultural movement of 1965-1969 that created a revolution in music and culture. I was a part of that movement, recording my album "Dawn" for Mercury Records in San Francisco in 1969. 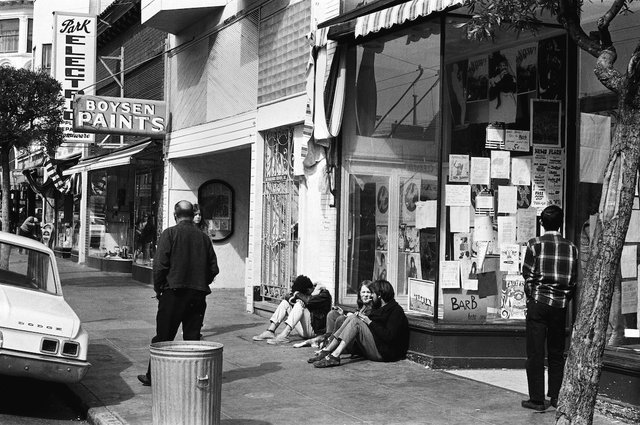 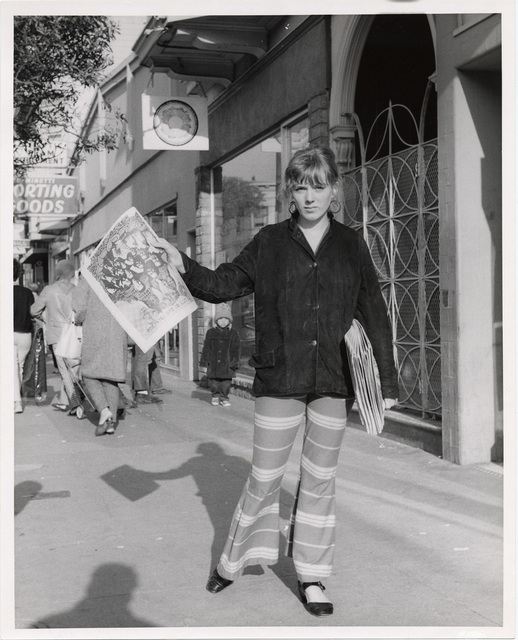 The Haight counterculture newspaper was called "The Oracle." The Oracle combined poetry, spirituality and multicultural interests with psychedelic design, reflecting and shaping the countercultural community as it developed in the Haight-Ashbury.
The Oracle was an underground newspaper published in 12 issues from September 20, 1966 to February 1968 in the Haight-Ashbury neighborhood. Allen Cohen (1940–2004), the editor during the paper's most vibrant period, and Michael Bowen, the art director, were among the founders of the publication.
Arguably the outstanding example of psychedelia within the countercultural "underground" press, the publication was noted for experimental multicolored design. Oracle contributors included many significant San Francisco–area artists of the time, including Bruce Conner and Rick Griffin. It featured such beat writers as Allen Ginsberg, Gary Snyder, Lawrence Ferlinghetti and Michael McClure. (Wikipedia) 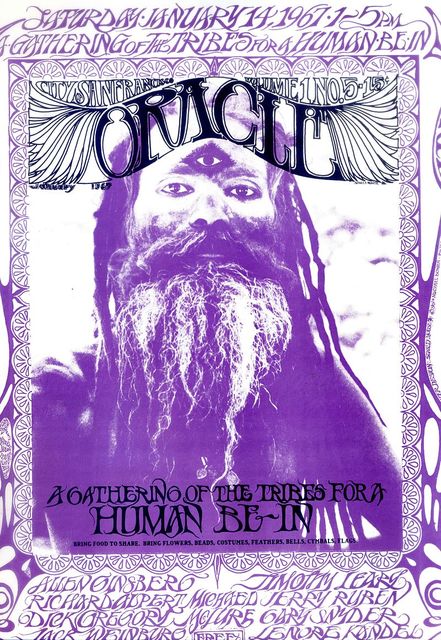 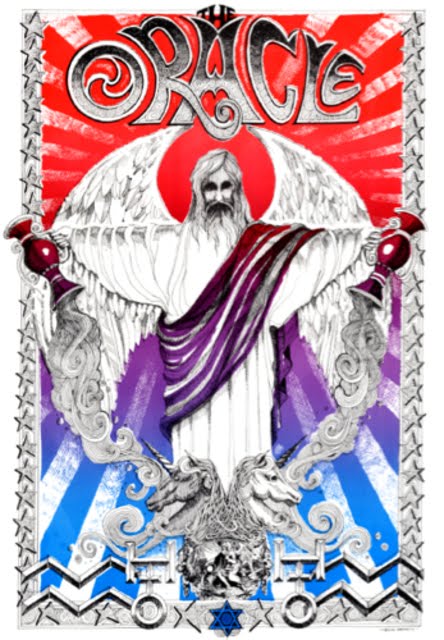 The Blue Unicorn
In 1965, San Francisco's The Blue Unicorn Coffee House moved to 1927 Hayes Street, one block off the Panhandle in the Haight-Ashbury District, where it remained until the late 1970s.
Although the word "hippies" made other isolated appearances in print during the early 1960s, the first use of the term on the West Coast appeared on September 5, 1965 in the article, "A New Haven for Beatniks" by San Francisco journalist Michael Fallon. In that article, Fallon wrote about the Blue Unicorn Coffeehouse, using the term "hippie" to refer to the new generation of beatniks who had moved from North Beach into the Haight-Ashbury district. (Wikipedia) 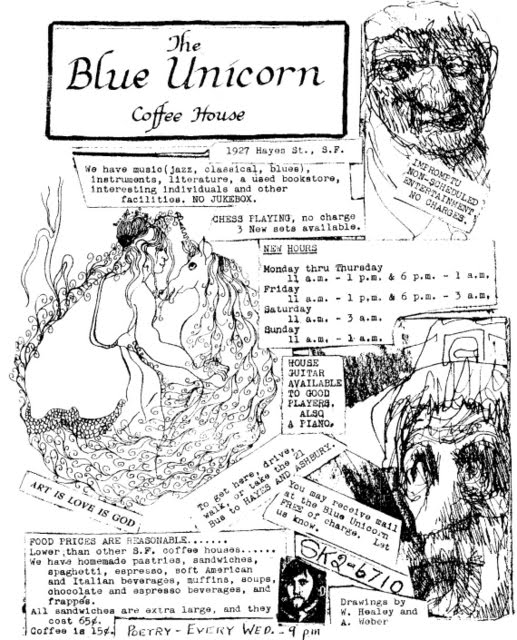 The Psychedelic Shop on Haight Street 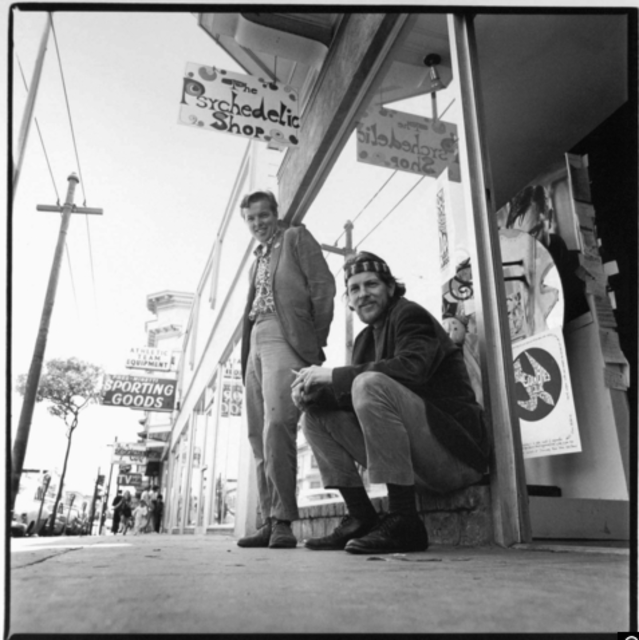 Photo by Herb Greene
The Psychedelic Shop was the name of the first "head shop" in America. Operated by Ron Thelin, who was a member of the Diggers, and his younger brother Jay, it opened on January 3, 1966. In addition to smoking paraphernalia, the store sold books and reprints of articles by Richard Alpert, Tim Leary, Aldous Huxley, and Joseph Campbell. They also supplied incense, records of North Indian classical music, psychedelic posters, bells and paisley material.
The Drogstore Cafe The Drogstore Cafe in the Haight-Ashbury district in San Francisco, California in the early summer 1967. (Michael Ochs Archive - Getty Images)

The Straight Theater
The "Straight on the Haight" was a vaudeville movie theater in the middle of the Haight Ashbury District that had been renovated during the Psychedelic 1960's. This multimedia environmental theater of light became known as the Straight Theater. Here at the crossroads of Haight and Cole, the Grateful Dead, Big Brother and The Holding Company, Country Joe, Santana and many other musical artists made history. 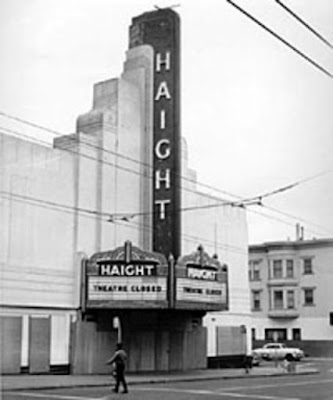 The Haight was closed in 1964 when this photo was taken.

A Haight Street Doorway
The signs on this store entrance reflect the culture of the Haight-Ashbury District of 1967 - A complete culture that had its own music, art, media, public services, clinic, diet, literature, newspaper, shops, fashion, and lifestyle. 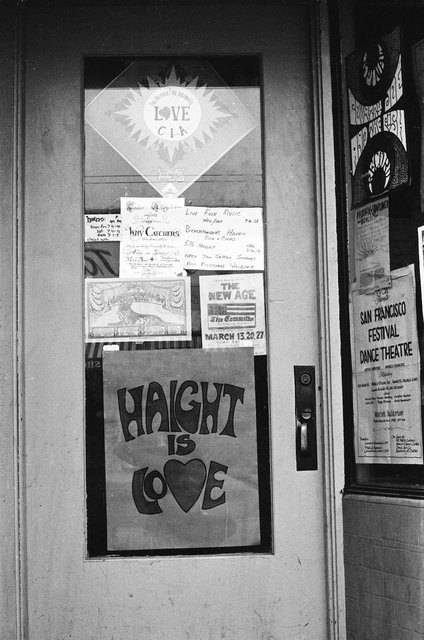 (Michael Ochs Archive - Getty Images)
Head Quarters on Haight Street
"Head Quarters" was the name of this fabulous "head shop" on Haight Street in San Francisco. Members of the counterculture never referred to themselves as "hippies" (a name made up by the newspapers). They were "heads": acid heads, or pot heads. Smoking items were sold here along with other items of interest to the counterculture. Notice the psychedelic art on the windows. 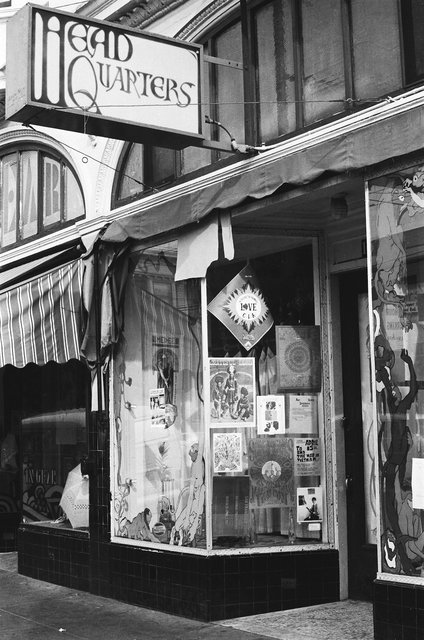 Brother Juniper's Coffee House
Father Blighton's "Holy Order of MANS" operated Brother Juniper's Coffee House on Haight Street in 1968, recruiting order members from among the counterculture: young people who were seeking self realization and spiritual attainment after having transformative spiritual experiences brought about by LSD. At first the order was called the Science of Man, but Father Blighton changed the name to the Holy Order of MANS, with "MANS" sonically alluding to "Mystically Illuminated Knights of the Spirit." 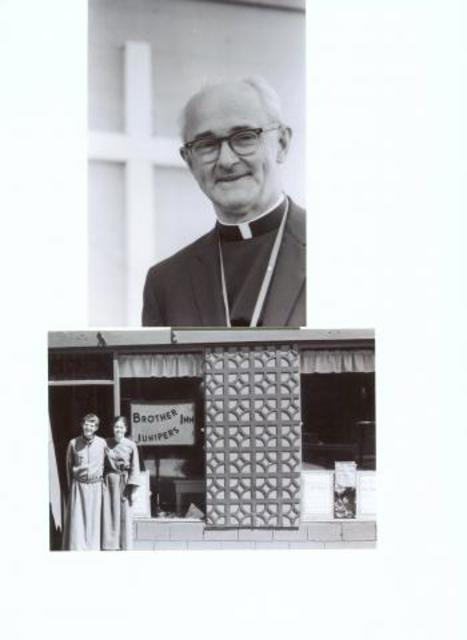 One of the brothers once told me this story of his first encounter with the order:
"I was totally stoned out on acid one day when I decided to go into Brother Junipers and challenge this Father Blighton guy. I figured he was some wacky Christian guy that was like all of the priests that I had ever talked to, who had no idea about God. Here I was living in the Haight with no money, and yet I was experiencing God every day on LSD. And so I walked in there. Blighton asked me if I wanted a cup of coffee and I told him yes. Then we sat down. I quickly bent forward and looked him straight in the eye without flinching and said: 'Do you believe in GOD?' I figured this would totally freak the guy out. But he just calmly answered 'No.'
"Well I didn't know what to say. Then Blighton just looked at me with eyes that pierced straight through me and said 'I don't believe in God; I KNOW God.' I joined the order at that moment."


Next in this series: "The Events"
Posted by Don Robertson at 5:10 AM No comments: