Sacred Music in the 15th Century 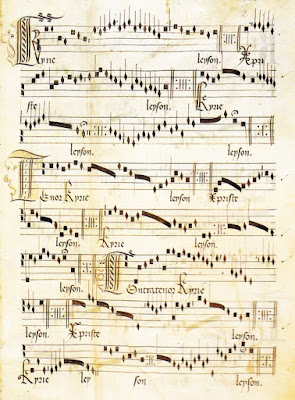 "Kyrie" for three voices by Guillaume Dufay - A page from a manuscript created for Cambrai Cathedral.

I first discovered the sacred choral music of the 15th century back in 1973. I was in Wichita, Kansas that summer, teaching classes in spirituality and using music in counseling seasons, where I was seeing first hand the wonderful results that uplifting music could bring to people with emotional and spiritual needs.
One young lady that I was working with was majoring in music at Wichita State University. I had just discovered the music of the great 15th-century composer Guillaume Dufay and we listened to a recording of one of his masses together. She was very surprised, as even as a music major, she had never before heard of 15th-century classical music. I made her a cassette tape of the mass and she began listening to Dufay's music in her home. Finding Dufay's music to be so beautiful, she soon told her college professor about it. She told me: "He just looked down his nose at me and with a scowl, he told me that this kind of music only belonged in a museum and should never be taken seriously, especially by a music student."
Modern ears sometimes are quick to brand the music of this century to be too musty and cold. But after giving the music some full attention, it just might come alive, and new listeners may begin to realize its wealth of great beauty.


The Birth of the Renaissance
The date that many writers give for the birth of the Renaissance period in European history to be around 1400. It is absolutely no coincidence that this is also the approximate date for the introduction of pure consonance in the sacred choral music of Europe. This introduction was courtesy of the English composer named John Dunstable (1390-1453), who added the consonant musical intervals of the 3rd and 6th to multi-voiced sacred music that during the previous century had been more restricted to the perfect forth and fifth intervals. Due to the tremendous resonant power that music has, adding the 3rd and 6th, which completed the harmony of the three-note chord called the triad, provided the basis for consonant harmony, resonating with the tremendous social change that accompanied the beginning of rebirth in Europe, already stimulated by the influence of the Islamic culture of Al Andalus (Spain) that I discussed in the first two articles in this series. 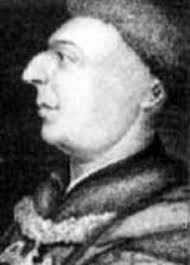 The polyphonic music style of the previous centuries had been based primarily on the root harmonic intervals of the perfect forth and fifth. What Dunstable did was provide his music with an abundance of what became known as the contenance angloise, balancing the interval of the perfect forth and fifth by adding the 3rd and sixth intervals. John Dunstable gave to European music the balance of music based on the musical triad (C E G).
John Dunstable was very famous, and his music very important. Most of his music has vanished, however, destroyed in the dissolution of the monasteries that occurred during 1536-1541, when Henry the Eighth destroyed catholicism in Britain.
Here is an example of a sacred composition from 14th century, before Dunstable's revolution:

This is an example of Dunstable's music:
"Quam pulchra es" by John Dunstable 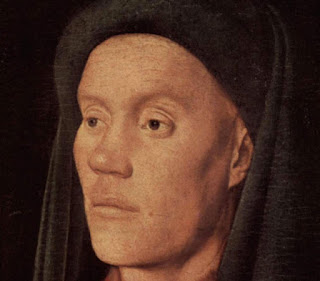 It was music from the Netherlandish countries, the area of Northern Europe now known as Northern and Eastern France, Belgium, and the Netherlands, that the most important 15th-century music arose. This was the music of the Franco-Flemish School of composers who were joined by the visual artists who help create the great cultural movement of that time, producing some of our greatest works of art.
The following two paintings are among the most famous from the Franco-Flemish world during this time of great cultural achievement: 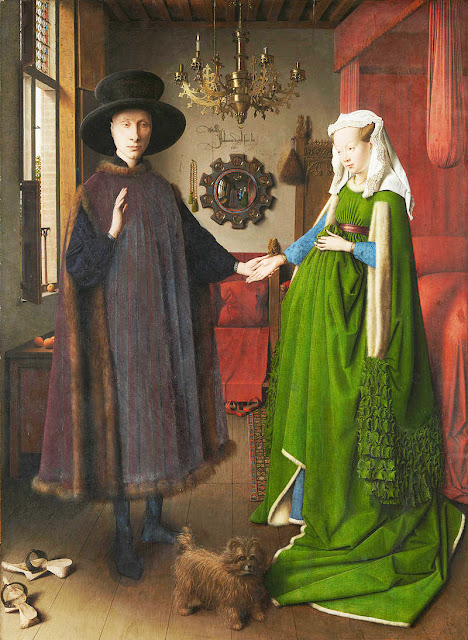 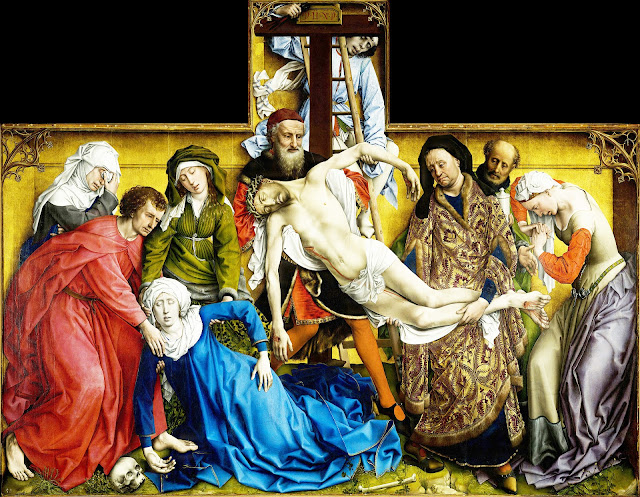 "The Descent from the Cross" by Rogier van der Weyden

(A great experience for me was the day that I spent in the Old Masters Museum in Brussels, where so many of these old paintings are on display. Already familiar with the music that at one time was coexistent with this art, the visit to this museum was a very special treat).
The greatest composer of the Franco-Flemish school was Guillaume Dufay, who created a music with an original style that will dominate the century. Gustave Reese, who wrote the monumental treatise of Renaissance music Music in the Renaissance, had this to say about the composer:


"Dufay -- one of the great exponents of French music, regardless of period… dominated the art of composition unchallenged from 1425 to 1450, when, though still at the height of his powers, he was approached in eminence by Ockeghem, the leader of a new generation."

Dufay was one of the most famous men of his generation. He created an entirely new musical style that would influence musical composition permanently, affecting every genre and sphere.
We don't know where or when he was born, but we do know that he was Flemish and that he began his musical career as a singer in the Burgundian court, and that he was associated with the town of Cambrai in Belgium, which at that time was under Burgundian rule. He moved to Italy in 1420, however. He was already famous by the 1420s, having written two wonderful works: the secular “Adieu ces bons vins de Lannoys” (Goodbye to These Good Wines of Lannoys) and the sacred “Apostolo glorioso” (Glorious Apostle).

Dufay filled various positions in Italy, including membership in the Papal choir in Rome. At some point, he returned to Cambrai where he supervised the music at the cathedral, writting new music for its repertory. He died in 1474. 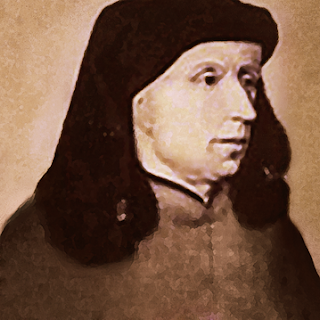 Johannes Ockeghem was born in the French-speaking province of Hainaut, in the town of Saint-Ghislainor according to recent research. He was the first chaplain for three French kings, and he held the prestigious position of treasurer at the great cathedral and monastery of St. Martin de Tours.
Ockeghem's surviving musical output is small, consisting of only a few motets, fourteen masses, and a couple of dozen chansons. Unfortunately, what was most likely a large output of music has been destroyed, perhaps in the over one-hundred conflicts and wars that plagued Europe during the 15th and 16th centuries. Ockeghem was known as an accomplished master of compositional technique, famous for his complex lines and polyphonic structures. He wrote some very beautiful music.
The beautiful "Sanctus" section from Ockeghem's Missa Mi-Mi


I will concluded my presentation of the sacred choral music of the 15th century in the next article in this series.
© 2016 by Don Robertson
Posted by Don Robertson at 7:57 AM No comments: