Psychedelic Daze Part One: "Berkeley and the Radical Left"

Psychedelic Daze Part One:
"Berkeley and the Radical Left"

This is Part 1 of my 12-part series on the San Francisco countercultural movement of 1965-1969 that created a revolution in music and culture. I was a part of that movement, recording my album "Dawn" for Mercury Records in San Francisco in 1969.


The future of music depends upon our knowledge of the important musical traditions of the past.

I am a child of the Sixties.
My life changed in a positive way due to the influence of this decade. It all started for me in Los Angeles 1966, when I was in a band playing covers of the pop music of the era: mainly the Beatles and the Mamas and the Papas.
I moved to New York City that fall. In New York I worked in the recording studios, studied Indian music, and wrote the first tabla instruction book. I moved to the San Francisco Bay Area in 1968, and then in 1969, I recorded my first album called "Dawn" for Mercury records.
I would like to tell a story about the psychedelic sixties, an important and influential era as far as culture goes, but with a history that has been distorted by mass media to appear to be something other than what it really was. It has been made out to be a time where there were wacky people called "hippies" (a derisive term that the media itself made up) who were dirty, stupid and lost. What hasn't been recognized is that we of that era created our own culture that was complete in every respect, with our own music, literature, poetry, diet, spirituality, art, dance, language, theater, manner of living, social programs and politics.
I'll start my story across the bay from San Francisco in Berkeley, where there was a radical political protest movement in progress that had begun years before my arrival. Associated with that movement was the folk music from the east coast, such as that being performed by Pete Seeger, Joan Baez, Woody Guthrie and Bob Dylan. We liked to laughingly call this city "Bezerkley"... we being the "hip" culture of the Haight-Ashbury district of San Francisco.

KPFA
The radical-left radio station KPFA had been launched in 1949 as the first listener-supported radio station in the United States. Previously, non-commercial stations were licensed only to serve educational functions. The first interview with anyone from the political movement was broadcast by KPFA, as was Allen Ginsberg reading his ground-breaking poem "Howl" in the 1950s. A broadcast by a group of marijuana-reform advocates resulted in the tape being impounded by the California Attorney General. 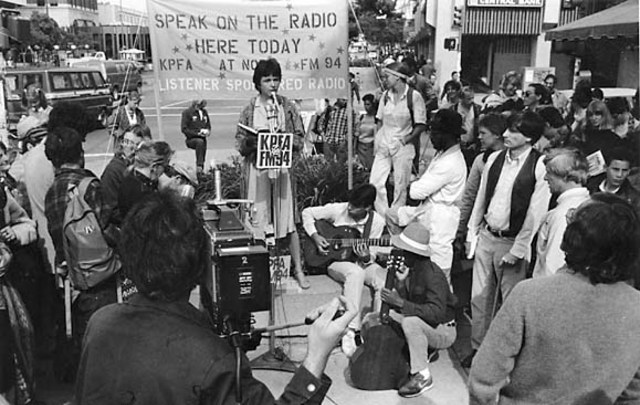 Max Scherr and the Berkeley Barb
Max Scherr founded the Berkeley Barb underground newspaper to provide a voice against the war in Vietnam, and to report on local topics from a moral perspective. The first issue came out on Friday, August 13, 1965 - the same day that the doors of the Matrix Coffee house first opened across the Bay in San Francisco (I'll cover that place later). The barb was a weekly underground newspaper that was published during the years 1965 to 1980. It provided details of local events and "happenings" in both a listing format and, more importantly, as fine black-and-white advertisements for the venues, and these have become an art form equivalent to the handbills distributed to advertise the events themselves. 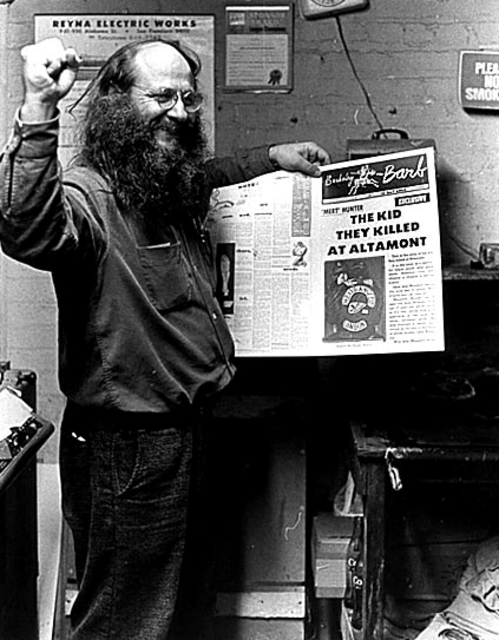 Max Scherr. Photo by Robert Altman
The cover of Vol. 5, No. 9 (1967) of the Berkeley Barb, depicted Lyndon Johnson dressed as Timothy Leary.  The Barb was one of the first and most influential of the counterculture newspapers of the late 1960s, covering such subjects as the anti-war and civil-rights movements, as well as the social changes advocated by the youth culture. 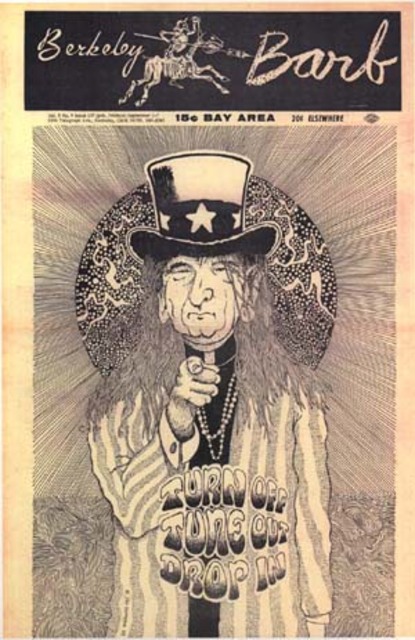 The Vietnam Day Committee
On November 20, 1965, the Vietnam Day Committee marched to De Fermery Park in Oakland where a rally was held. This march, along with the International Days of Protest rallies all over the country, demonstrated the strength of the Berkeley anti-war protest movement in a way that no previous march had done. 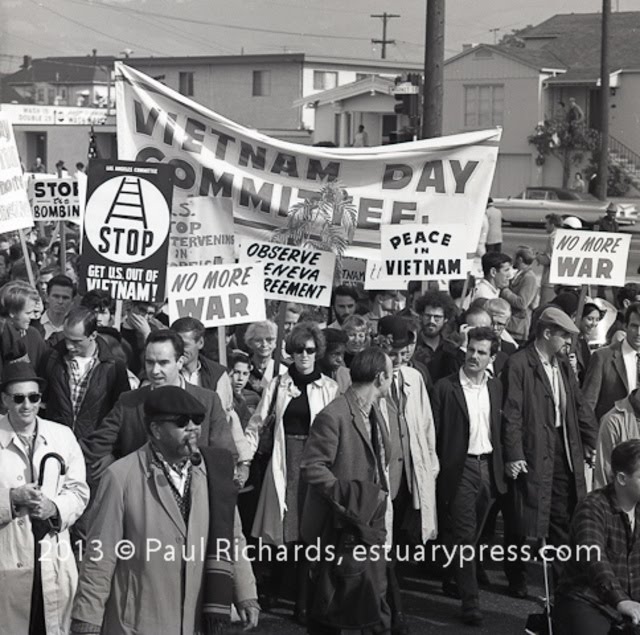 Black Panther Party
The Black Panthers were formed in California in 1966 and played a short but important part in the civil rights movement. They believed that the non-violent campaign of Martin Luther King had failed, and any promised changes to their lifestyle via the 'traditional' civil rights movement would take too long to be implemented, or would simply not be introduced. 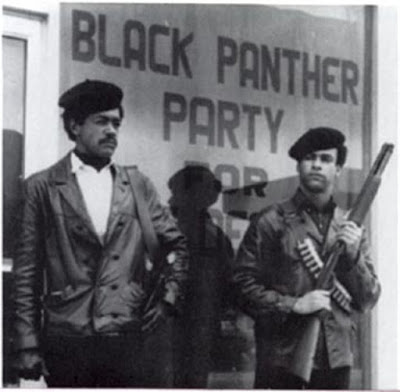 Stop the Draft "Sit-in" in Oakland
Protesters staged a "sit-in" during "Stop the Draft Week" in December, 1967 at the Oakland Army Induction Center on Clay Street in downtown Oakland, California. They sat in the street, blocking buses that were carrying draftees. 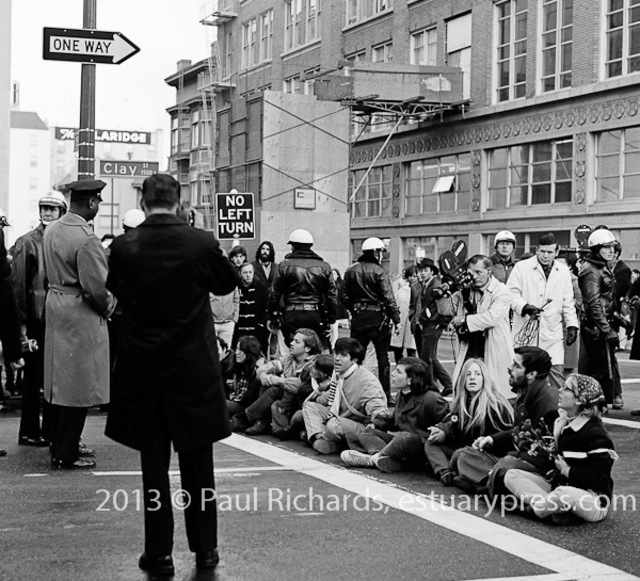 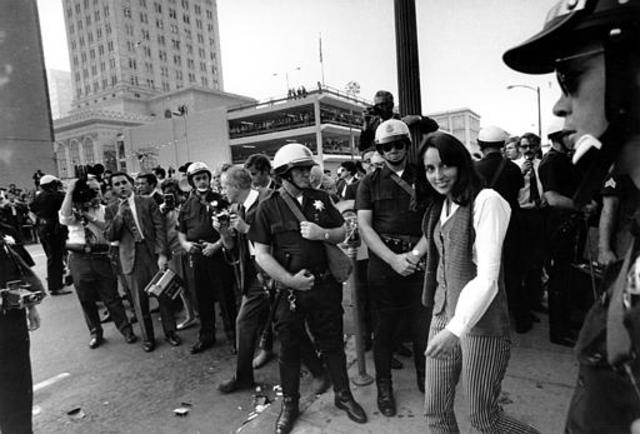 Shambala Book Store
For decades, Berkeley was the place to buy knowledge. The metaphysical bookstore called "Shambala" in Berkeley was on Telegraph Avenue in a three-block stretch of storefronts, a number of them bookstores. It was founded in 1969 by Samuel Bercholz and Michael Fagan. 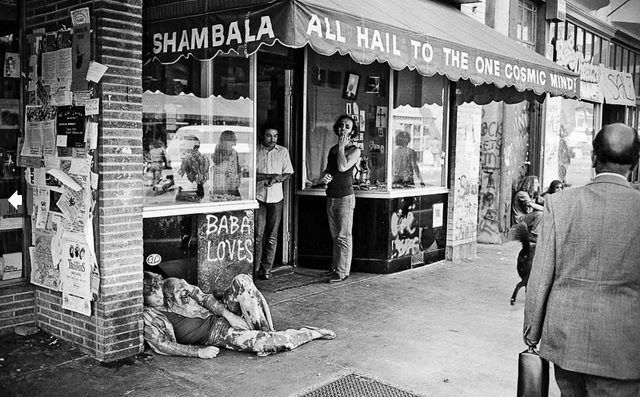 Moe's Books
"Moe's Books" was founded in 1959 by Moe Moskowitz and his wife, Barbara, the original site of the store was a small shop on Shattuck just north of University Avenue. He moved the store to Telegraph Avenue in the 1960s, right in the middle of the era of the Free Speech Movement and the famous anti-war demonstrations that put Berkeley on the political map. 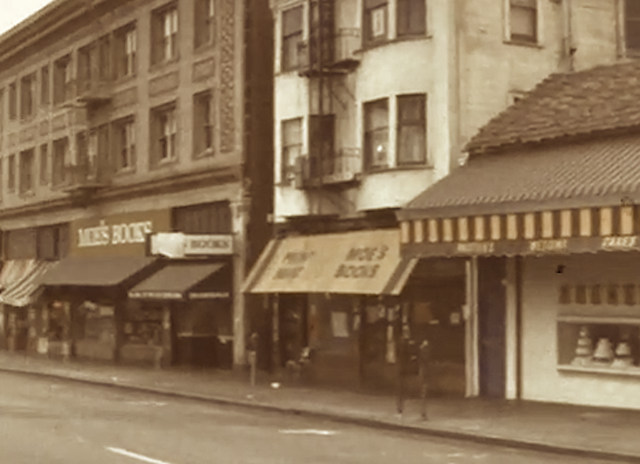 People's Park Protest
On Thursday, May 15, 1969 at 4:30 a.m., Governor Ronald Reagan sent California Highway Patrol and Berkeley police officers into "People's Park," a vacant lot in Berkeley that members of the counterculture had converted into a park, overriding Chancellor Heyns' May 6 promise that no action would be taken without warning. The officers cleared an 8-block area around the park, while a large section of what had been planted as a park was destroyed. An 8-foot-tall chain-link wire fence was installed to keep people out and to prevent the planting of more trees, grass, flowers, or shrubs. 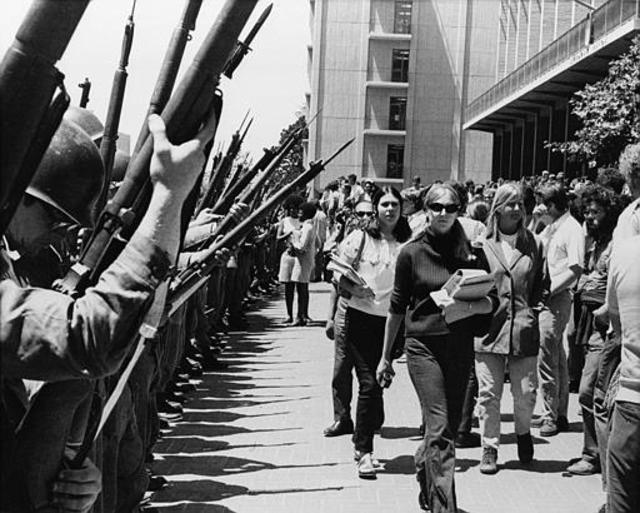 Thank you Wikipedia for contributing to my articles.

Next! "Psychedelic Daze Part Two - The Heroes of the Hip"
Posted by Don Robertson at 8:49 AM 1 comment: