This is the final article in my series "The Genesis of New Age Music."
The decade of the 1980s was the decade when the musical genre called "new age music" was developed. I had recorded and released my first private-label new-age album Celestial Ascent in 1980, and it was one of the first albums distributed by Ethan Edgecombe, the first new-age-music distributor, as I explaned in previous articles. Ethan was the person responsible for bringing together various albums of healing and meditation music to create for the first time, a new-age-music genre in the world of commerce.

I went on to explain how the genre grew, finally moving into record stores across the country and in Europe, and how by the end of the decade of the 1980s, it had become something other than music for healing and meditation when it was absorbed into the corporate music industry that was grabbing up all of the other genres, watering them down and allowing them to become a transmogrified reflection of what they originally had been.
In this final article I will describe how I continued creating my music independently of any direction dictated by the corporate mentality that was conquering not only music, but everything else of value. 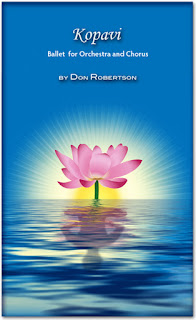 Cover for the Kopavi score, by Mary Ellen Bickford

The experience of trying to create my electronic symphony Anthem had been so frustrating and difficult for me that I had resolved to turn instead to writing music for a real orchestra, even though I wondered if I would ever hear it performed in my lifetime. I dismantled my recording studio, put the equipment that I had used to record my albums into storage and set up a writing table instead.

I returned to studying scores of orchestral music that I had purused many years before, refreshing my knowledge of orchestration, and then in 1991, I began composing Kopavi, a ballet for orchestra and chorus.
I had decided that my choice of form for the ballet would be the form that is employed in the performance of classical music in North India (sitar performance, for example). The music would begin at a very slow pace and rhythm would be gradually added until the end of the performance where the music would triumph with a stunning climax. The scenario for the ballet was simple. Beginning with a single male dancer and a single musical instrument, the cello, the 25-minute work then unfolds, adding more and more dancers and music as the discovery and unfoldment of the spiritual path of man (or woman) evolving toward divinity is unfolded.
I finished the music in 1993, and during the following year, I hired a young man to create the parts for the musicians.
The music sat on my shelf until 2000, when I attempted to create a computerized realization of the work using the electronic and recording equipment that I had at that time. I could not record the entire work because of the limitations of my studio equipment, and so I created four excerpts from the full ballet for demonstration purposes. In 2016, I made a video that explains the details of the ballet, and presents the demo recording that I had originally made in 2000:

The String Quartet
When I closed my recording studio in 1989, I decided to return to writing acoustic music. My plan would be to first write an orchestral work, a string quartet, and then a large-scale choral work. I had tackled Kopavi, the orchestral work, first. Next would be the string quartet.
To prepare for it, I began studying the great quartets of Haydn, Beethoven and Debussy.
I moved from Colorado to Richmond, Virginia in 1995. I had accepted a no-bid contract with the Commonwealth of Virginia to help program the new computer systems that would be implemented in all of the branch offices of the Virginia Department of Motor Vehicles. On the morning of January 6th, the North American Blizzard of 1996 struck the East Coast. I awoke that morning realizing that I had been dreaming the music for the opening of my string quartet. I grabbed some paper and began writing down what I clearly heard in my dream: the first few pages of the first movement. I then allowed the music to spontaneously flow for a few more pages.
I managed to get to work that morning. Very few employees had shown up, as most roads were not drivable and power was out all over the city. I was sitting at my computer terminal writing some computer code when I felt a divine presence surround me. Suddenly I begin to hear the music that will become the middle section of the first movement. I grabbed some computer printouts from my desk, turned them over, and wrote out the entire middle section then and there. This is how this quartet unfolded.
The following video was filmed of a performance of the first movement several years ago in Nashville. After this performance, several women came to me explaining that the music in the middle section had caused them to cry.

Mary Ellen
Mary Ellen Bickford visited me in Richmond in January of the following year and moved in in March. I was working on the third movement of the string quartet by this time. It was a time of great momentum for both of us. We began by initiating two projects: our educational website Dovesong.com and the Musical Kaleidoscope project.

At the Virginia Department of Motor Vehicles, I was working with a young programmer named Mike Martin who was creating the agency's first website. Mary Ellen and I hired Mike to create a website for us in his spare time. It would be an educational website that would make my ideas about music available anywhere in the world for anyone with a computer and an internet connection. Never had there been a technology such as this... I could finally really reach out.
Dovesong.com went online in March of 1997. Once the website was available, I began composing and writing articles and uploading them. I continued to do this for the next three years.
Rescuing My Music
Mary Ellen's moving to Virginia provided a huge encouragement for me. On a trip to back to Colorado, she convinced me to find the master tapes for the albums that I had created during the 1980s and that I had pretty much abandoned after the fiasco of the new-age music corporate takeover. We found them stored somewhere in the basement of my mother's home in Denver. Mary Ellen and I then took the master tapes to a young synthesizer and computer wizard named Bryce Wemple who lived in Fort Collins. He restored my albums from the original material, digitally, sometimes having to splice different sections from different digital copies together to create a new master. 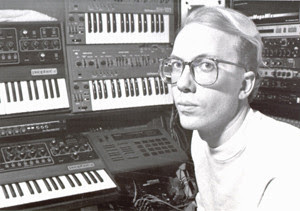 Bryce
In 1998, I purchased a new recording system. After setting up a studio in our home in Richmond, I started recording music again. I began with the completion of my 1980s unfinished album Celestial Voyager followed by two new albums: Keys and Alpine Symphony. After our move to the Atlanta area in 2000, I created Yoki, Poeme and Aum.

Building Dovesong
At the beginning of the year 2000, Mary Ellen and I moved to the Atlanta area. I had accepted a job as CTO of a small Atlanta computer systems company. Meanwhile, we continued to build the Dovesong website. By the year 2002, Dovesong.com had not only initiated one of the very first online score libraries, but we had uploaded hundreds of pages of information about positive music, and an mp3 library of rare music. In fact, we were the only website that made downloadable files of the great North Indian classical music and American gospel music genres available for free from anywhere in the world. We began receiving up to 3,000 visitors a day, and intense downloading of our music files was in progress all day and all night long.
We received emails from India thanking us for making the great works of Indian classical music available. We were told that there had been no access to this music for so many people before we put our mp3 library online. Additionally, gospel musicians, preachers and historians telephoned us to praise our making available the great and very rare recordings of traditional American gospel music.

My Last Stand . . .
What can I say about the original "new age" electronic music? Listen to "Oceans of Tenderness" by Ash Ra, or "Timewind" and "Blanche" by Klaus Schulze, "Harmonic Ascendant" by Robert Schroeder, "Antarctica" by Vangelis, "Ecstasy" by Deuter. For me, these were the works that opened the door to the use of the synthesizer in music as a creative, artistic force. At the time that these works were being created, the synthesizer was still considered the ugly stepchild that very few people knew anything about. At that time, the guitar was God.
What passes as the so-called "new-age music genre" today is not a genre at all. It is simply a catch-all label used to categorize a less-strident variety of popular music, differentiating it from it's harsher brethren. Just take a stroll through one of the Facebook pages where "new-age music" is posted and you will probably find an eclectic mix of slow jazz-influenced stuff, mechanical electronic items, heavy-duty acoustic guitar covers of heavy-metal-band songs, and even discordant music and tunes that incorporate disturbing electronic sounds. I wouldn't plug myself into this 'genre' if my life depended upon it! However, that is not to say that great healing and meditation music isn't being created today. Of course, it is.

*
I will leave you with the following video. Painters who pioneered the 19th-century so-called "Impressionist" art movement in France broke away from the classical painters of that era when they began creating canvases that featured scenes from nature, such as people who were picnicking or dancing. They chose to paint contemporary views of urban life instead of portraits of kings and queens, and scenes from brutal wars, as had been the mandate for all "serious" artists of the time. Today, those historical paintings hanging in the Louvre in Paris have been mostly forgotten by the book- and poster-buying public, while the works of the impressionist painters, Monet, Van Gogh, Bazille, Degas, Renoir, Pissarro, Seurat, and Morisot are revered by millions.
When I visit the Musee d'Orsay in Paris, where the works of the 19th-century impressionist painters are on display, I can stare at canvases by artists like Claude Monet, who depicted beautiful seaside scenes, and enjoy the peaceful feeling that they give me. A few years ago, I created a video that I like to think of as a 21st-century impressionist painting. It is an "animated painting" that features a seascape, but unlike a canvas covered with oil paint, it is alive with its own unfolding story... lovers meeting on the beach, a jogger...

By subscribing to my Music Futurist blog, you will be kept up to date as I post new blog entries and new episodes of my show "Notes, with Don Robertson."