This is Part Three of my series of articles titled "The Sacred Choral Music of the Renaissance," a 12-part series introducing the great tradition of sacred choral music that arose in Europe between the years 1400 and 1600 during a time of tremendous cultural development. It was music that was sung in Roman catholic cathedrals and monasteries, composed by the great composers of that time. A great deal of this great body of work has survived in the form of manuscripts and published part books that were housed in the libraries of the great cathedrals and monasteries of Europe (part books contain the melodic lines that choir singers performed to create the harmonic fabric of the sacred choral compositions).
Singing was generally unaccompanied, but in some cases, instruments were employed to double the choral parts of the part books, or to add an organ accompaniment. The music was written primarily for a cappella choir (unaccompanied by instruments). However, instruments began gaining their own footing in choral compositions beginning in the first decade of the 17th century. 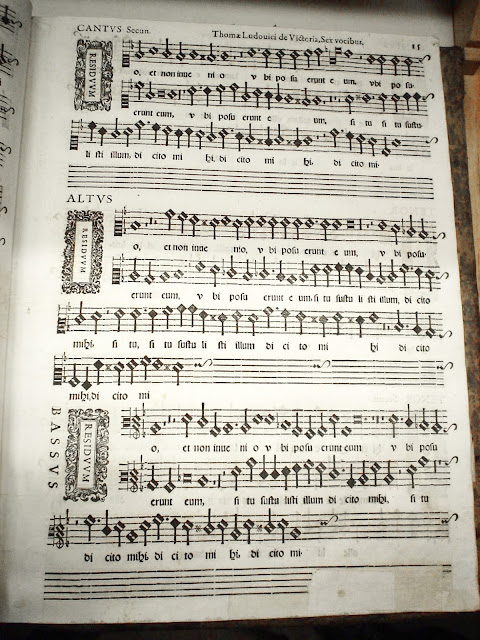 A page from a part book printed in 1585 showing 3 of the 6 parts for Victoria's motet "Ardens est cor meum." This page contains the music that was sung by sopranos, altos and basses. The other 3 parts for this 6-part motet are on opposite page.

The Renaissance sacred music that we are describing is an harmonic extension of the plainsong melodies known as Gregorian chant. These melodies constituted the main parts of the mostly Latin-language liturgy that were sing by monks, nuns and clergy for hundreds of years in Roman catholic institutions and churches. The Gregorian melodies were then adopted by Renaissance composers who created music in an harmonic style, meaning that multiple voices sang music composed with more than one single simultaneous musical line, as had been the case for the chant melodies.
These harmonic compositions constitute the classical music of the Renaissance period, just as the compositions of Beethoven, Schumann, Brahms, Wagner and Franck belong to the body of classical music composed during the 19th century.
Harmonic music did not replace the extant melodies of Gregorian chant. Instead, they were sung alongside these melodies throughout the Renaissance period, the Gregorian melodies often woven into the fabric of the Renaissance choral compositions themselves. During the Renaissance period, two great traditions, the harmonic and the Gregorian, were the inseparable brother and sister companions.


Great Composers Abound
The finest composers of the early Renaissance were Guillaume Dufay (c.1400-1474), Johannes Ockeghem (c.1410-1497), Jacob Obrecht (1457-1505) and Josquin des Prez  (c.1440-1521). Some glorious masses and liturgical compositions, called motets, have come down to us from these great composers.
The greatest composers of the late renaissance were Orlando di Lasso (his church-latin name was Orlande de Lassus) (1532-1594), Jacob Handl (Jacobus Gallus) (1550-1591), Giovanni Pierluigi da Palestrina (1525-1594), William Byrd (1540-1623), Cristobol Morales (1500-1553) and Tomas Luis de Victoria (1548-1611). Because of the spiritual purity of the music, the late Renaissance witnessed the golden age of choral music, and perhaps even the golden age of all classical music.
These composers, among others that I will cover, created a great body of work that is truly one of the greatest treasures of Western civilization: a civilization, however, that has not yet fully realized this important fact. That is why there are only a few books in English and a few web links related to Gregorian chant and her sister, Renaissance sacred music. There have been a number of fine recordings produced, however, and in the final analysis, this, along with the great dedicated choirs in England and Europe who specialize in this music, is the most important tribute that has been made to a great music treasure, keeping it alive.

The End of an Era...
About 1600, what is known as the "Baroque Era" began, and the style of music that was sung in the catholic churches and institutions changed dramatically. Hence, the classical music changed also. Left behind was the "a cappella" style with its music designated for voices, as unique parts for instruments were now being added. Along with this, the new music of the 1600s blossomed in the secular arena, and thus we see the introduction of the first opera in 1600 in Florence, Italy. The so-called Baroque Era terminated in what is called the Classical Era of Mozart and Haydn, and this was followed by the Romantic Era of the 19th Century.
Today, Renaissance sacred music is not generally recognized as being an integral part of the mainstream classical music tradition that is dominated by the music of the era of Mozart and the music of the 19th and 20th centuries. For many classical music lovers, classical music only begins in the 18th century with J.S. Bach, and yet it seems that few mainstream concert-goers have the slightest comprehension of the music of this great master. It takes serious listening to begin to grasp the music of any of the deeper classical composers, be they Beethoven, Wagner, Bruckner and Bach from the 18th and 19th centuries, or Palestrina, Lassus and Obrecht from the 15th and 16th. The rewards of this kind of concentrated listening, however, are great.
In fact, here in America, I find few people who know anything about classical music at all. Added to this is the deplorable situation existing in many concert halls across our unfortunately deteriorating country, and an almost complete lack of any kind of education concerning the great treasures of classical music from any of the world's traditions being offered in educational institutions, where sporting games are apparently considered more important.
During the 19th century, the music from before the time of Bach and Vivaldi, unlike the paintings from the same era that could be viewed in art books and museums, required live performances to be heard. A near silencing of Renaissance music therefore prevailed until radio and recording technology became available in the 20th century, and it wasn't until the 1960s that a very few long-playing recordings began to show up in record shops in America. By 1980, I had managed find only about thirty record albums of Renaissance sacred music, the result of an intense nine-year search. That is not a lot of recordings to represent a 200-year period of time, especially when some compositions were represented by multiple recordings.

...And the Beginning of a New Era
Now, however, the great masterworks of Gregorian chant and Renaissance sacred music are available for almost every person to experience through 21st-century technology. But today's culture has deteriorated to the point where the style of the great Renaissance sacred music repertory is tremendously out of sync with so-called "modern" tastes. For today's listener, unaccompanied choral music may at first appear to be no match for the electronically enhanced sounds of contemporary music. Again, deep listening will prove otherwise.
There is very little contemporary music that can match the quality, beauty and spirituality that Renaissance sacred music has to offer, a boon to those who have realized the limitations of so much of today's music and are ready to move on. Once one has become intimately familiar with the sacred music of the Renaissance, it becomes painfully obvious that this is a musical culture that should never have been forgotten, and should not continue to be neglected by contemporary society: a society desperately in need of the calming and healing effects offered by a purely consonant music composed by great masters from a nearly forgotten time. When this music is finally accepted by spiritually minded souls of all nationalities and cultures, it will be a great day. What a treasure we have awaiting us!
My discovery of Renaissance choral music and Gregorian chant in 1971 initiated a project that I would passionately pursue for decades, researching, studying and listening to Gregorian chant and the harmonic sacred music of the Renaissance period for over thirty years, ultimately creating a collection of carefully chosen music that I will be publishing for study and education, to enable composers, singers, and musicians to discover the riches and beauties of two of the world's greatest music traditions: Gregorian chant and Renaissance sacred choral music. A preview of my publication efforts is available on my DoveSong.com website.
In the next article in this series, I will introduce the four types of sacred choral music employed during the Renaissance period.
Stay tuned. I'm Don Robertson...
© 2016 by Don Robertson
Posted by Don Robertson at 8:54 AM 2 comments: