This is Part 9 of my 12-part series on the San Francisco countercultural movement of 1965-1969 that created a revolution in music and culture. I was a part of that movement, recording my album "Dawn" for Mercury Records in San Francisco in 1969.

What is psychedelic art? This is what Wikipedia has to say...


Psychedelic art is any art or visual displays inspired by psychedelic experiences and hallucinations known to follow the ingestion of psychoactive drugs such as LSD and psilocybin. In common parlance "psychedelic art" refers above all to the art movement of the late 1960s counterculture. Psychedelic visual arts were a counterpart to psychedelic rock music. Concert posters, album covers, lightshows, murals, comic books, underground newspapers and more reflected not only the kaleidoscopically swirling color patterns of LSD hallucinations, but also revolutionary political, social and spiritual sentiments inspired by insights derived from these psychedelic states of consciousness.

The posters that were created to advertise events were works of psychedelic art. Here are some examples:

The Chicken on the Unicycle, by Victor Moscoso 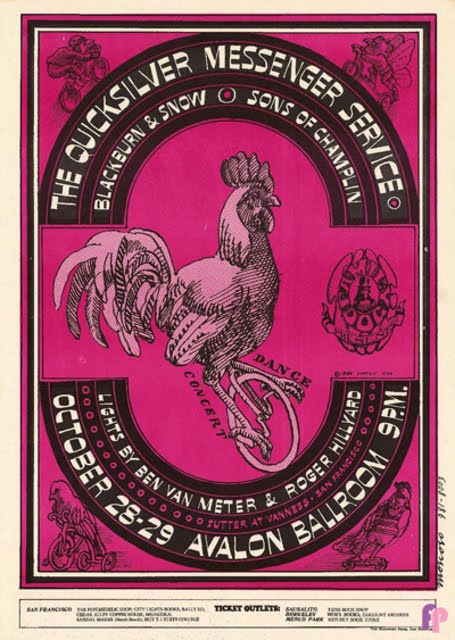 Poster for a concert at the Avalon Ballroom October 28 and 29, 1966, produced by Chet Helms and the Family Dog. This poster, known as “The Chicken on the Unicycle,” was designed by Victor Moscoso. The central image is a drawing of a rooster riding a unicycle. In the four corners are similar drawings of other birds riding a bicycle, a skateboard, a tricycle, and a scooter. The acts were the Quicksilver Messenger Service, The Sons of Champlin, and Blackburn and Snow. 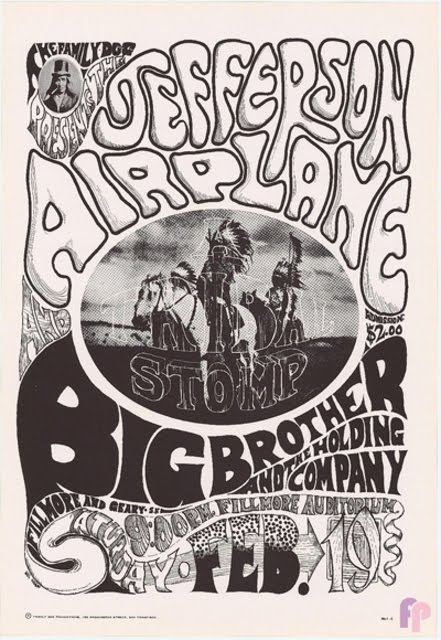 This great poster printed for the Fillmore Auditorium concert of February 19, 1966 represents the first Family Dog concert promoted by Chet Helms. Chet suggested the use of the image and Wes Wilson is credited with the design. Wilson was involved in the design of many of the early Family Dog and Bill Graham posters and is widely known for his use of lettering to form the psychedelic images that make up the central design. Bands were Big Brother and the Holding Company and Jefferson Airplane.

Bill Graham, concert promoter for the Fillmore Auditorium in San Francisco, commissioned the following concert poster from Wes for a concert to be held on November 18, 1966. Having recently married his second wife, Eva, this was an especially busy time for Wes. He completed 56 posters for Bill Graham in only 14 months, averaging one poster per week for the Fillmore. 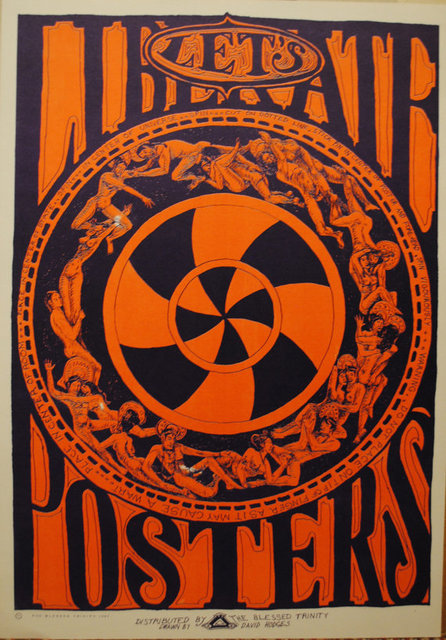 March 9, 1967 San Francisco the police busted shops that were selling a poster titled "Let's Liberate Posters," a crudely executed orange and blue circle of men and women in Kama Sutra sexual positions, drawn by an artist who had also painted psychedelic murals at the Print Mint and Quasar's Ice Cream. These posters were immediately banned from store shelves because of the drawings. 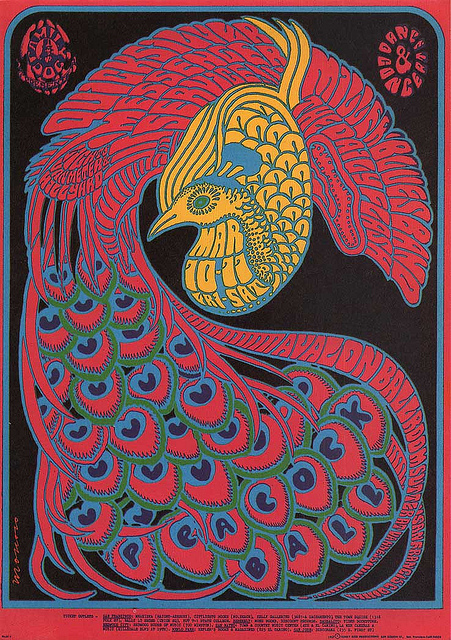 Quicksilver at the Avalon Ballroom in 1967 by Victor Moscoso. Moscoso was the first of the rock poster artists of the 1960s era to have formal academic training and experience. After studying art at Cooper Union in New York City and at Yale University, he moved to San Francisco in 1959. There, he attended the San Francisco Art Institute, where he eventually became an instructor. (Wikipedia)
Jefferson Airplane and Grateful Dead Poster, by James Gardner and Herb Greene 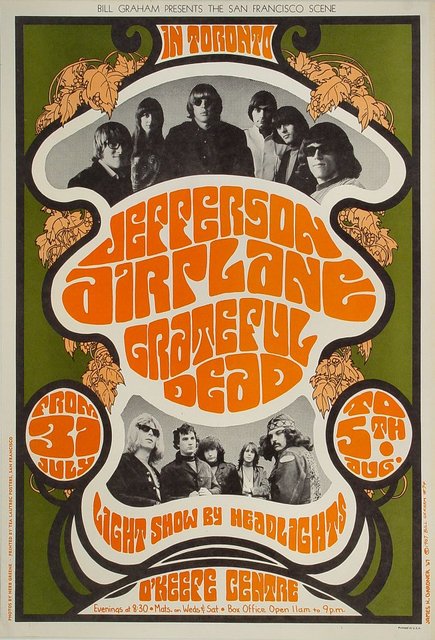 In the summer of 1967, Bill Graham took The Grateful Dead and Jefferson Airplane to Toronto. This is among the rarest of posters. There are hard-to-verify stories that the original cache of posters was confiscated at the Canadian border by the Canadian border patrol, but whether the posters were seized or simply put away by contented Canadians, this summer concert made a big impression.
Zap Comix, by R. Crumb
And now we turn to R. Crumb. He came to San Fransisco, joined the counterculture movement, and in 1968 published this comic book that he both wrote and drew:

This was the first of a series of comic books that we, in the San Francisco counterculture, ardently read. The books featured stories with characters such as Fritz the Cat, Mr. Natural, the spiritual guru, and the images of R. Crumb's "Keep on Truckin" motif.

R. Crumb had no problem portraying sexual fantasies, as the counterculture was open to exploring all hidden desires. One comic strip depicted a family all having sex together. These comics are an artistic cultural representation of a period in history.
I hadn't followed R. Crumb's movements after I had left the San Francisco scene at the end of 1969. However, in 2007 I was in Paris for several weeks and was delighted to see that he was famous there. Big beautiful posters announcing of exhibitions of his work were in many of the metro walkways. The following year, I found out from a friend of mine, a friend of R. Crumb, that the artist has an apartment in Paris, but I believe his main residence is in the French countryside outside of Paris.
Zap Comix No. 1, by R. Crumb
R. Crumb's Zap comix portrayed life in the Haight-Ashbury District and gave substance to the subconscious mind of the counterculture movement. 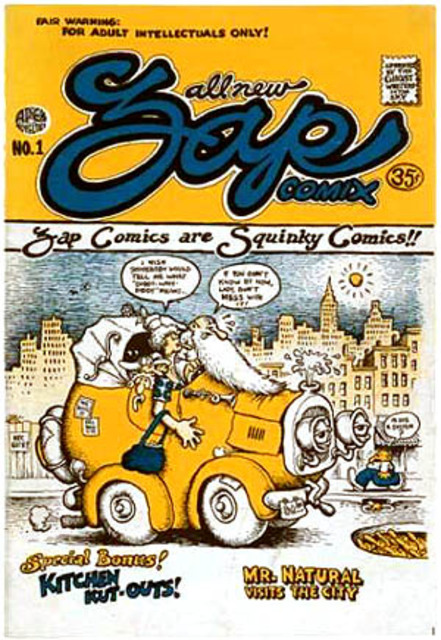 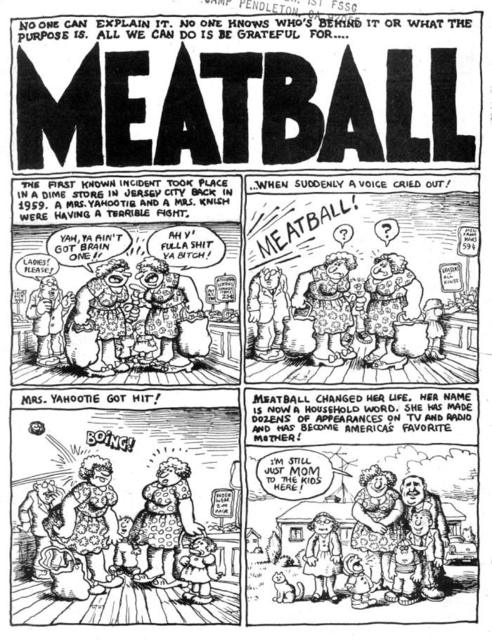 Comic Book Page, by R. Crumb
R. Crumb poured out his inner world, in addition to illustrating the life around him in the Haight-Ashbury counterculture. This illustration is from Zap Comix No. 1.

Winterland Concert Poster, by Victor Moscoso and Rick Griffin
This poster was created for a concert at Winterland in San Francisco on November 12, 1968. I was considering using Rick to do the album cover for my "Dawn" album and met with him to discuss the project. He showed me his most recent work. It was dark and distrurbing. I had already begun realizing that many people in the counter-culture were turning to the dark side and Rick, whom I noticed had developed a major facial tick, was perhaps on this path, and so I abandoned the idea of working with him. 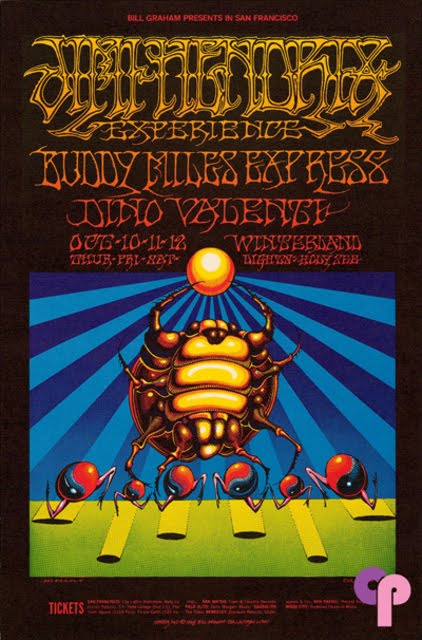 There was a very dark side and a very light side to what was happening in San Francisco. Here was a cultural movement that was introducing our future - what was waiting for society ahead. It was a creation of the beginning of the end times: the end of a cycle where dark and light would both become extended deep into culture, and where each person on Earth would be faced with the choice of which to become aligned with. We were the actors in this cosmic play being enacted. I was there to create the record album that demonstrated both sides - an album that would actually belong to the 21st century, as it was so far ahead of its time. I had to create it then and there in San Francisco, because I was portraying the two sides that were unfolding before my eyes: the dark and the light.
After recording my "Dawn" album for Mercury Records, I went to Mexico with my (then) wife, where I lived for over six months, cleansing myself and aligning myself with the light. When I returned to San Francisco in the fall of 1969, I saw this dark side entering the counterculture everywhere around me. I had chosen the light, but by the end of 1969, the dark was taking over the counterculture. It was time to leave, and so I headed back to my home state of Colorado. The following year, I began my mission of creating a world of light in music, to help people at the crossroads in the transformation that would be taking place. I will tell my story of the Sixties in my book "Pot, Paisley and Rock 'n Roll" that I am writing at this time (2016). It is a novel: an account of my experiences, fictionalized to protect the innocent.
Next in the Psychedelic Daze Series is Ten: "The Bands - Part 1"
Posted by Don Robertson at 10:35 AM No comments: