Say Goodbye! to hard rock as it writhes in dying pain, and bid Hello! to Americana, the new acoustic popular music. Thank God you have arrived.

In Part One of "The New Acoustic Popular Music," I discussed the emergence of what I believe to be the beginning of the new popular music for the 21st century. It is being brought to us by our youth, and it is based on the roots of the great popular, jazz and folk music of the 20th century... music that emerged from the streets and mountains of the Southeastern USA, the area that we affectionately call "The South," with its voice reaching the world from town where I live, Nashville, Tennessee.
In this, and the proceeding articles of this series, I will introduce many fine young artists and groups from around the world featured in video performances that I hope you will love as I do. Are you over thirty-years old and addicted to the music of Hendrix, AC-DC, the Stones, Zep and heavy-metal bands? I'm sorry if you scoff at this music and chuckle in your private amusement at its folly, but the times they are a-changin', to quote Maestro Dylan.
I have been predicting for fifteen years that our entrance into the 21st century is opening the door to new music that will be healing, happy and healthy, coming to the aid of those of us who are ready to raise our consciousness out of the depths of despair and desolation brought about by the dark fruits of so much 20th-century art and music.
In Part One, I presented the group called Mumford and Sons. Now in the remaining parts of the series, I am simply going to unfold one video after another of so many great young artists, and so many great songs, with just a few words about each, sometimes just pointing out innovations in their music. All great revolutionary new styles incorporate new features, new instruments, new forms, and this is no different in the new acoustic popular music. To start rolling, let's begin in Nashville.

Gillian Welch and Dave Rawlings
2004, I took my daughter-in-law to Nashville's great Station Inn to watch these two artists perform for twenty people in this small club. Gillian Welch lived about a mile from my Nashville home. Gillian and Dave, along with artists like Emmylou Harris and Rodney Crowell, are primary forerunners of the new style. She was almost thirty-years old when she recorded her first album in 1996.
What a great experience was that performance at the Station Inn. Back then, only those who appreciated great bluegrass and folk music knew about this small unassuming Nashville venue. Today, because of the tremendous influence that Nashville's music scene now has, you can't get into the club's sold-out performances. This ancient little place is now surrounded by the giant facades of Nashville's trendy new "Gulch" district. 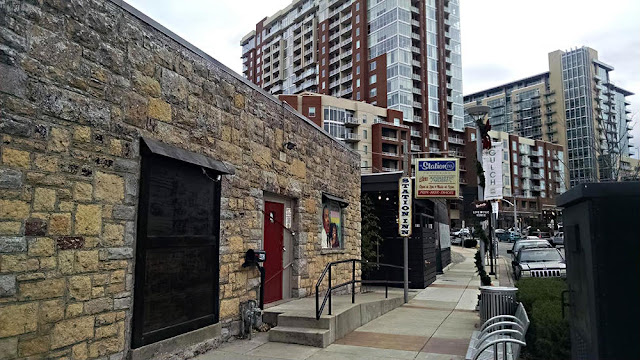 Nashville's Station Inn today, surrounded by the new buildings of "The Gulch."

Blind Pilot
Now listen to the group Blind Pilot sing that same Gillian Welch song. From Portland, Oregon, Blind Pilot is one of the new acoustic pop bands, releasing their first album in 2006. They are really great.
Blind Pilot's "Miss Ohio" at the Liberty Theater in Astoria, Oregon in 2009

Check out the drumming on this Blind Pilot tune:
Blind Pilot "We are the Tide" from 2009

Check out Blind Pilot on "Ellen," the American daytime television show. Notice the instrumentation: vibraphone (from jazz), organ (from church) and a solo trumpet - instruments long forgotten in pop music:
"Half Moon" by Blind Pilot


The Avett Brothers
A group headed by two brothers hails from North Carolina. Arising from the fertile soil of Southeastern American, the Avett Brothers features a banjo, but the sound and musical style are not that of bluegrass music. The banjo technique employed by brother Scott Avett is not the three-finger "pickin' style" that became the hallmark of bluegrass music first popularized by Earl Scruggs in the 1940s. Instead he employs the traditional strumming technique known as "clawhammer," the original banjo strumming style of the Southern Appalachian mountains.
The Avett Brothers were early on the scene with their first album, released in 2002. Their fifth album landed on the Billboard charts in 2007. The band has performed on national late-night television, and that gained them a wide audience.
"I Would Be Sad" by the Avett Brothers live in their own studio in 2013.

"Souls Like the Wheels" by the Avett Brothers in 2013.

The following song, their first single, became such a sensation that it reached the No. 2 position on the Billboard chart in 2013:
"Ho Hey" by the Lumineers

You will have probably noticed that the drummer uses only a bass drum with a foot pedal and a tambourine to create a percussion accompaniment. Gone in this song is the traditional trap set of yore. Every rock band from last century featured what is called a "trap set," with bass drum, tom toms, high hat and various cymbals. It was a requirement in popular music inherited from the jazz-style popular music of the 1920s onward. The new acoustic acts are getting creative with rhythm after the over fifty years of ongoing rhythmic sameness of rock and roll.
"Stubborn Love" by the Lumineers

In the following episodes of "The New Acoustic Popular Music" I will continue to present videos that I hope you will love and enjoy as I do. Episode Two that follows has music by three great new groups.