Psychedelic Daze Part Six: "The Promoters and their Venues"

Psychedelic Daze Part Six:
"The Promoters and their Venues"

This is Part 6 of my 12-part series on the San Francisco countercultural movement of 1965-1969 that created a revolution in music and culture. I was a part of that movement, recording my album "Dawn" for Mercury Records in San Francisco in 1969.

Bill Graham
Bill Graham was an American impresario and rock concert promoter. In the early 1960s, he moved to San Francisco, and, in 1965, began managing The San Francisco Mime Troupe, an avant-garde performance group. Members of the group were arrested for an outdoor production deemed "too risque" by the San Francisco Parks and Recreation Commission. On November 6, 1965, Graham staged a benefit for the group's legal defense fund with a line-up that included Lawrence Ferlinghetti, Jefferson Airplane, the Fugs, and John Handy. Graham then teamed up with local Haight Ashbury promoter Chet Helms and his Family Dog commune and used their network of contacts to organize a benefit concert. After that, he promoted several free concerts, sharing the Fillmore Auditorium together, 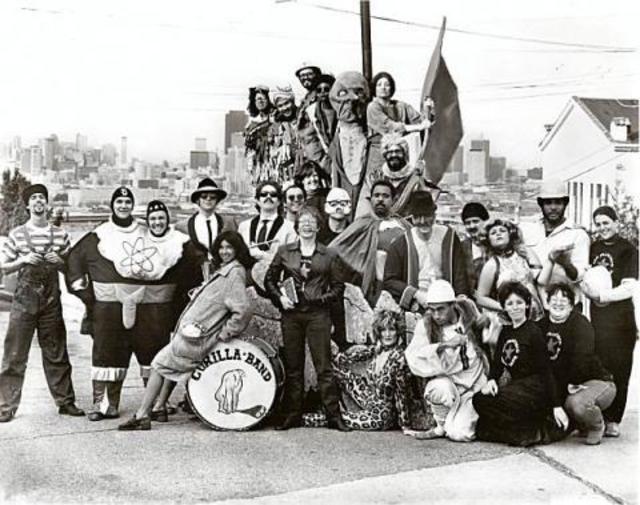 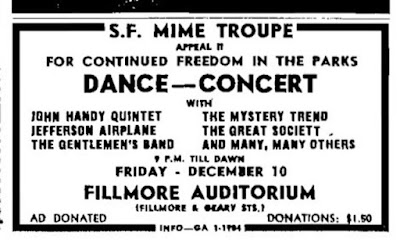 The second benefit concert for the "San Francisco Mime Troupe," managed by Bill Graham, has passed into legend as it was the first rock concert that Bill Graham produced at the Fillmore Auditorium. Promoter Chet Helms and Graham both produced shows on different nights at the Fillmore from February through April 1966, but then Graham took out a lease on the Fillmore without telling Helms, who responded by taking over the Avalon Ballroom, and the then began producing his shows there. 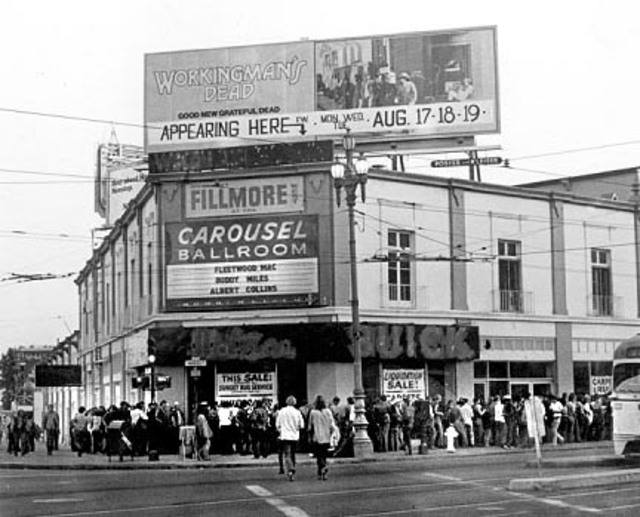 The Carousel Ballroom was first operated by a collective formed by the Grateful Dead, Jefferson Airplane, Quicksilver Messenger Service and Big Brother and The Holding Company. Bill Graham took over the lease of the Carousel and converted it to what he named "Fillmore West," moving his acts from the old Fillmore Auditorium. (He opened the Fillmore East in New York City on March 8, 1968).

Chester Leo "Chet" Helms, often called the father of San Francisco's 1967 "Summer of Love," was a music promoter and a major figure in San Francisco during the counterculture period in the mid to late Sixties. In 1965, Chet Helms teamed up with some Haight-Ashbury folks and started producing some of the greatest rock events of all time. Helms was the founder and manager of Big Brother and The Holding Company and recruited Janis Joplin as its lead singer. He was a producer and organizer, helping to stage free concerts and other cultural events at Golden Gate Park (the backdrop for San Francisco's "Summer of Love" of 1967), as well as at other venues, including the Avalon Ballroom. He was the first producer of psychedelic light-show concerts at the Fillmore and the Avalon Ballroom, and was instrumental in helping develop bands that had the distinctive San Francisco Sound.
Chet Helms and Bill Graham had very opposite personalities. BIll was a hard-edged business guy who viewed the counterculture community as outside of himself. Chet was a mellow member of the counterculture.
Chet and his friends lived in a commune called "The Family Dog," who held a series of legendary concerts between April 1966 and November 1968 that featured a mix of musicians, including rock, blues, soul, and Indian classical. His friends included Bill Graham, the Diggers, Ken Kesey, Jack Kerouac, Gary Snyder, Lawrence Ferlinghetti, Stephen Gaskin and Timothy Leary. (Photo by Robert Altman). 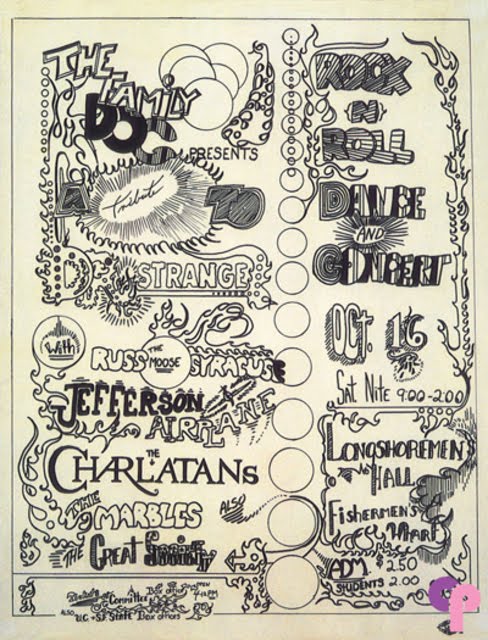 An early handbill, by Alton Kelley  This rare handbill advertised the first event promoted by the Family Dog at the Longshoreman’s Hall on 10/16/65. Ellen Harmon, one of the original four partners in the Family Dog collective, was an avid reader of Marvel comic books and helped dedicate the first dance to “Dr. Strange, Master of the Mystic Arts."

Tribute to "Ming the Merciless" Concert
The original members of the Family Dog Commune's last concert occurred November 6, 1965 with the Mothers of Invention and the Jefferson Airplane performing.

Cheep Thrills, by Big Brother and The Holding Company
"Cheap Thrills," is a studio album by "Big Brother and The Holding Company." The cover was by R. Crumb, the creator of Zap Comix (covered in Part Nine). R. Crumb's original album cover featured a cartoon of the band naked in bed together, but that was reject by the label. The group, featuring the singer Janis Joplin, had been formed by the great promoter Chet Helms, and their first significant gig had occurred in October 1965, presented by Chet's Family Dog Commune. 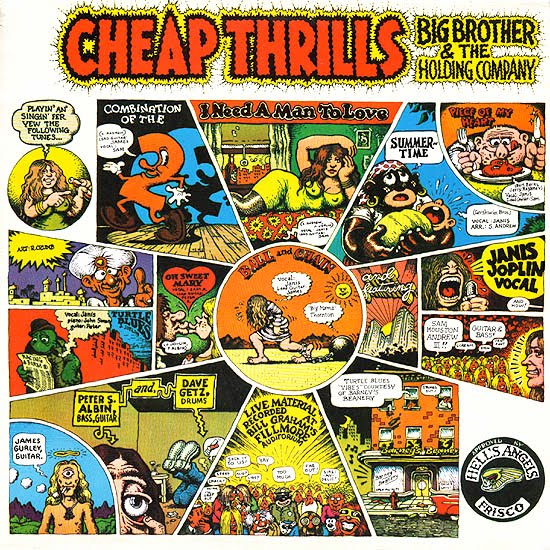 The Avalon Ballroom
The Avalon Ballroom was a music venue in the Polk Gulch neighborhood of San Francisco, California, at 1244 Sutter Street (or 1268 Sutter, depending on the entrance). The space operated from 1966 to 1969, at the height of the counterculture movement.
Light Show Pioneer Bill Ham
The bearded man on the right is light-show pioneer Bill Ham. His company "Light Sound Dimension" (LSD) created the first psychedelic light show. Bill pioneered kinetic lighting, first using this technique at the Red Dog Saloon in Virginia City with "The Charlatans" in 1965. Chet Helms had met Bill at the Red Dog Saloon where he asked him to produce light shows at the Avalon Ballroom. 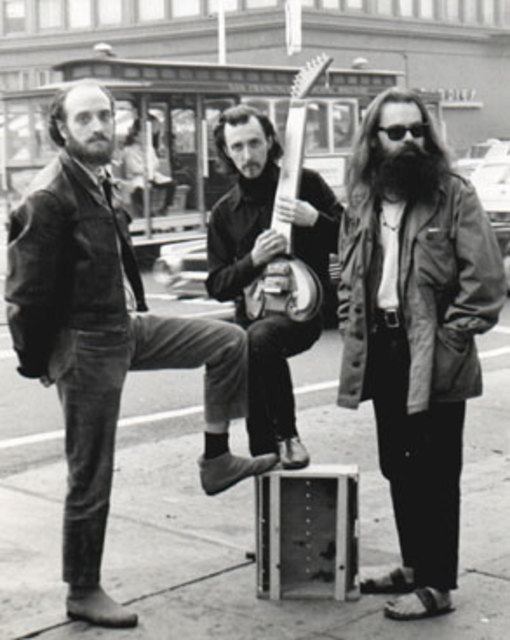 The Family Dog on the Great Highway
Chet Helms lost his lease on his Avalon Ballroom and moved the rock shows that he promoted to a rickety wooden building where for years before, generations of San Franciscans came to eat fried chicken, roller skate and play with slot cars. The venue opened on June 13 1969 with the Jefferson Airplane. Chet will finally pull out of concert promotion in 1970.  The Sixties were over.
I spent many a night at the Family Dog on the Great Highway during 1969. One Saturday night at the Dog, I ran into Timothy Leary. I didn't speak with him; he was just hanging out. I should have said something to him, but I missed that opportunity. 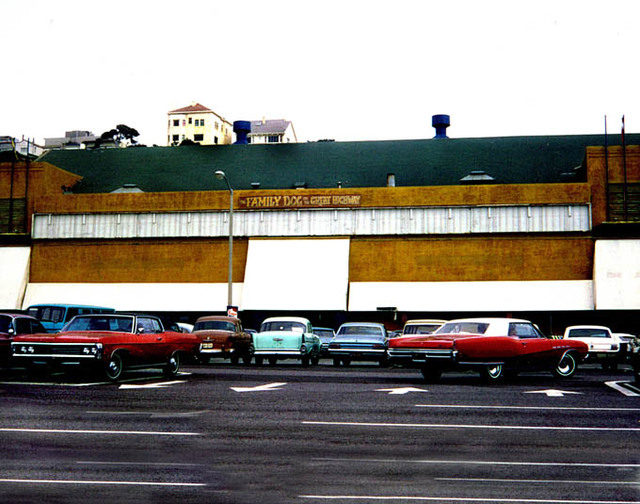 Thanks for reading. Next in this series is: Psychedelic Daze Part Seven "The Quick and the Dead"

Posted by Don Robertson at 5:13 AM