Klaus Schulze
Twenty-two-year old Klaus Schulze began his musical life in 1969 when he became the drummer for Edgar Fröse's band Tangerine Dream. They released their first album Electronic Meditation in 1970. The group consisted of Edgar Fröse, Klaus Schulze and Conrad Schnitzler. In 1971, Klaus left Tangerine Dream and joined guitarist Manuel Göttsching and bassist Hartmut Enke to form Ashra Tempel, with whom he recorded several albums. However, his goal was to become a solo synthesizer musician, composing and performing his own music. His first solo album appeared in 1972 and was called Irrlicht. 
Klaus can create an incredible symphonic sound, and when I first heard it over the airwaves on the "Music from the Hearts of Space" radio program, it made me realize how synthesizers could be used to create orchestral music, which is what I had wanted to do. But chances of getting your music played by an orchestra were slim, and writing music that wasn't full of 'modern' discords was out of the question: no conductor wanted that.
I don't really like much of Klaus's music because it is too discordant for me. However, when Klaus is on, he is on.
t won the Grand Prix International. That same year he also created two albums with Japanese composer Kitaro, the artist whom Ethan Edgecombe will introduce in the United States about 1981 or 1982. "Bayreuth Return" and "Wahnfried 1883," the two long tracks on the Timewind album, are dedications to Richard Wagner, one of the greatest and the most misunderstood composers of all time. Wahnfried was the name of Wagner's home in Bayreuth, where he died in 1883.

Listen to this wonderful recording called "Blanche" from the 1977 album Body Love.

Simply called "X", Klaus' two-LP tenth album was a breakthrough and an artistic triumph, with cuts that employed a symphonic sound that had never been achieved by anyone using synthesizers before. The tracks were named "Friedrich Nietzsche," "Georg Trakl," "Frank Herbert," "Friedemann Bach," "Ludwig II von Bayern" and "Heinrich von Kleist." The following tender piece is "Georg Krakl":
Georg Krakl

Klaus created his own "Innovative Communication" record label in 1979 and released an album called Harmonic Ascendant by Robert Schröder. From the sound of the music and from insider reports, the album was largely the creation of Klaus. It's a great album with a totally new and refreshing sound with Wolfgang Tiepold playing cello:

Ash Ra
In 1976, a very important album called New Age of Earth was released in Germany by Ash Ra Tempel, the group that Klaus had formerly been with, but subsequently left, and that by this time consisted of only the German guitarist Manuel Göttsching. 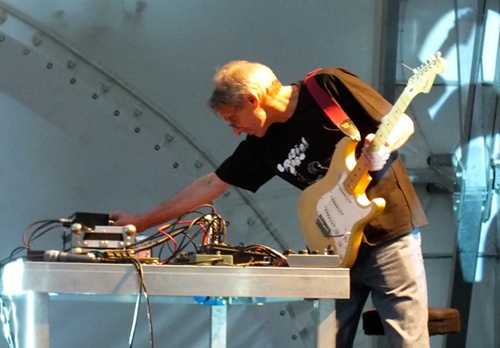 The cut "Ocean of Tenderness" was a favorite on the "Hearts of Space" radio program and a favorite of mine also. New Age of Earth is a masterpiece of transportive electronic music.
I was blessed to hang out with Manuel and his wife Iiona Ziok on a trip to Berlin in 2009, and I happy to have this legendary musician as my friend.
"Ocean of Tenderness" by Ash Ra (Emmanuel Göttsching)

As I have stated in Part Three of this series, I first heard Klaus and Manuel's music on Stephen Hill and Anna Turner's Thursday late-at-night "Music from the Hearts of Space" radio program on Berkeley's KPFA. For the months after my first discovery of this program, I was exposed to music that had been completely unknown to me. These were recordings that were practically unavailable in American record stores: music by Klaus, Manuel, as well as other European electronic music artists like Popul Vuh, Vangelis, Deuter, Ariel Kalma, Peter Michael Hammel and Jean-Michel Jarre.


Archie Patterson
How did all of this electronic music that was completely unknown in America get into the hands of Steven Hill? Let me introduce Archie Patterson who helped Stephen set up his "Hearts of Space" program. 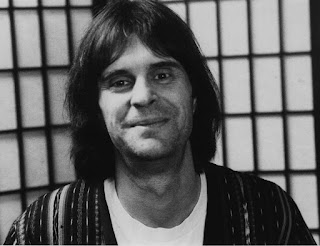 Archie began broadcasting European electronic rock music on a two-hour radio show called Eurock on KFIG-FM in Fresno, California. Airing Wednesday nights 9:00 to 11:00 pm, he introduced in America for the first time new music by European musicians and groups such as Amon Düül II, Klaus Schulze, Popol Vuh, Can, Tangerine Dream, Magma, Guru Guru, Faust, Embryo and Ange, among others.
In 1973, he began publishing Eurock Magazine. Archie has been, and continues to be, a most significant figure because of his influencing American musicians and his distribution of European rock and electronic music recordings in America.
I am honored that after the release of my first albums, he referred to me as “perhaps America’s greatest synthesist.”

And now for a sampling of music from other European artists:

The late Edgar Fröse was the founder of the band Tangerine Dream. He produced this wonderful album Epsilon In Malaysian Pale in 1975:

Popul Vu
Popol Vuh was a German electronic band founded by keyboardist Florian Fricke in 1969. Their first album Affenstunde was released the following year employing a Moog synthesizer and ethnic percussion instruments. Two more albums later, Fricke moved into a more acoustic idiom as in Hosianna Mantra of 1972. Fricke and Popul Vu were pioneers in the idiom of the new European music.

Vangelis
Vangelis is a Greek keyboardist and composer who created some really great records during the 1970s. I would search the Bay Area stores for them and if it hadn't been for the "underground" Rasputin Records store, I would have probably not found any of them anywhere else.
Listen to this wonderful early Vangelis album "L'Apocalypse Des Animaux" from 1970:

He became famous only after the release of the film "Chariots of Fire," for which he had composed the award-winning music. This following is a cut from the music that he created for the 1983 Japanese film called Antartica:

Peter Michael Hamel
I had the pleasure of meeting this wonderful man, Peter Michael Hamel, at Ethan Edgecombe's home early in 1980, soon after the release of my Celestial Ascent album that he praised and promoted in Germany. Listen to the great music that was featured in the 1974 album Dharana by his band called "Between" (between classical and rock music):
Dharana 1974 by Between (Peter Michael Hamel)

Peter, who today is a professor of music in Hamburg, wrote this important book in 1978: 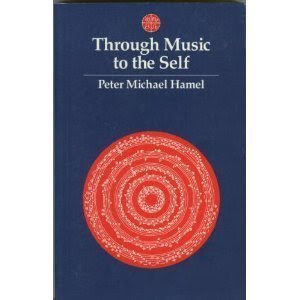 Through Music to the Self is available at  Amazon.com

Jean Micael Jarre
French composer Jean Michel Jarre is the son of the famous film composer Maurice Jarre. Jean Michel created an innovative album of electronic music in 1976 called Oxygène. He recorded the album in his home using a variety of analog synthesizers and other electronic instruments and effects. This record sold very well and was the beginning of Jarre's huge success during the following decades.
Oxygene, by Jean Michel Jarre
Deuter
I met Chaitanya Hari Deuter when Ethan Edgecombe brought him to my house to meet me in 1981. A peaceful man with peaceful music, he was from Germany, but had been living in an ashram in India where he created some now rare cassette tapes of some great electronic meditation music that I had fortunately been able to find.
Listen to Ecstasy from 1978:

Bernard Xolotl
My good friend Bernard Xolotl from France, living in the Bay Area at the time, created a masterful album with Daniel Kobialka, principal second violinist with the San Francisco Symphony Orchestra. Bernard and I have stayed in touch since the early 1980s and I visited him in France in 2009. We both share a mutual love and understanding of North Indian classical vocal music and the music and work of Richard Wagner. It is rare to have a friend who shares interest in such gifts.
Saturn Return from Procession by Bernard Xolotl and Daniel Kobialka
Ariel Kalma
I first heard Ariel's music on "Music from the Hearts of Space" and I met him in 1981 when he was visiting San Francisco from his native France. I love Ariel's Osmose Album:

A Note
On this page, I have presented an educational experience of an important European music tradition, something you probably will not find anywhere else on the internet. This is what my "Musical Kaleidoscope" educational project, which I have been developing since 1971, is all about.
I will continue to present the great music traditions of positive music from all cultures and times in articles and shows posted in this blog. If you are interested in music education for the 21st century, obviously a vital necessity, please subscribe to my "Music Futurist" blog to keep up-to-date.
While various Internet writers are puzzled over what "new age music" really was and where it came from, these first four parts of my seven-part series "Genesis of New Age Music" make it pretty clear, while bringing forth some of the gems that have been buried by the deluge of mediocracy that floods into any burgeoning music genre that threatens to make some money.
Next in this series on the "Genesis of New Age Music" series is Part Five, where I present my own music from the era. Following that, you will find out how greed and misunderstanding caused the new age music genre that I was a part of creating and bringing to the world to be hijacked and transmogrified into something other than what we originally intended.
Sound familiar? This is what happens to any genre of music that can be turned into a busine$$ venture lacking the heart and soul of true art. Classical and popular music, rock and roll, rap, soul, gospel music, country music, jazz... all of these genres were unable to escape this invasion. I will explore many of these in upcoming posts to my Music Futurist Blog, to expose their hidden gems.
Another gem to ponder... every organization, every job, every investment has a first and second priority. One is profit, the other is service. If a person has the job of cleaning bathrooms at a fast-food restaurant, or is the CEO of a multi-national corporation or anything in between... what is the first priority of that job: the need for money, or the service that is being performed? Every job can be a service first, and the money to be earned, second.