by Don Robertson
This is Part 11 of my 12-part series on the San Francisco countercultural movement of 1965-1969 that created a revolution in music and culture. I was a part of that movement, recording my album Dawn for Mercury Records in San Francisco in 1969.

Living With The Animals, by Mother Earth
Mother Earth was an eclectic American blues rock band formed in 1967 in California, fronted by Tracy Nelson, who sang the blues/gospel number "Down So Low" on their 1968 Album Living With The Animals. Nelson, who hailed from Madison, Wisconsin, began her career as a solo artist, but formed the Mother Earth ensemble after moving to San Francisco. The group performed at the Fillmore West in the late 1960s alongside Janis Joplin, Jimi Hendrix, and Eric Burdon and was included on the soundtrack to the 1968 film Revolution.
Creedence Clearwater Revival, by Creedence Clearwater Revival
Creedence Clearwater Revival is the debut studio album by the American rock band Creedence Clearwater Revival, released in 1968. The reissue liner notes state that while "Susie Q" proved to be a hit, the band had played for years as "The Golliwogs" in the early 1960s, releasing numerous singles before achieving success in the pop world. While the band did gain success with their chart debut, critics initially denied the band respect.

Creedence Clearwater Revival "Bad Moon Rising" (1969)
The Ace of Cups
The Ace of Cups was an American rock band formed in San Francisco in 1967. It has been described as one of the first all-female rock bands. 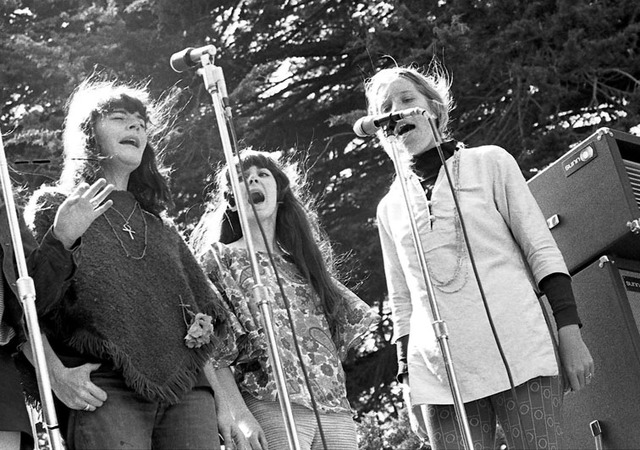 Photo by Kenneth Loh
This is their 1968 single entitled "Simplicity" from West Pole, a vintage television special that aired in 1968 on the Public Broadcasting Service (PBS) predecessor, National Educational Television (NET):
"Simplicity," by the Ace of Cups

This is a film of the Quicksilver Messenger Service band playing at Sonoma State College just North of San Franciscos in 1969:
It's a Beautiful Day
For me, the song "Whitebird" by the group It's a Beautiful Day sums up the spiritual "vibe" of what was really happening in San Francisco... the undercurrent.
For some background about this group, Wikipedia says:

It's a Beautiful Day is an American band formed in San Francisco, California in 1967 that featured vocalist Pattie Santos along with violinist David LaFlamme and his wife, Linda LaFlamme, on keyboards.David LaFlamme, a former soloist with the Utah Symphony Orchestra, had previously been in the band Orkustra, and unusually, played a five-string violin. The other members of It's a Beautiful Day in its early years were Hal Wagenet (guitar), Mitchell Holman (bass) and Val Fuentes (drums). Although they were one of the earliest and most important San Francisco bands to emerge from 1967's social phenomenon called by the media the "Summer of Love," the band never quite achieved the success of contemporaries such as Grateful Dead, Jefferson Airplane and Santana, with whom they had connections. The band created a unique blend of rock, jazz, folk, classical and world beat styles during the initial seven years it was officially together.

"White Bird," by It's a Beautiful Day

The full It's a Beautiful Day Concert from July 7, 1970 at Tanglewood 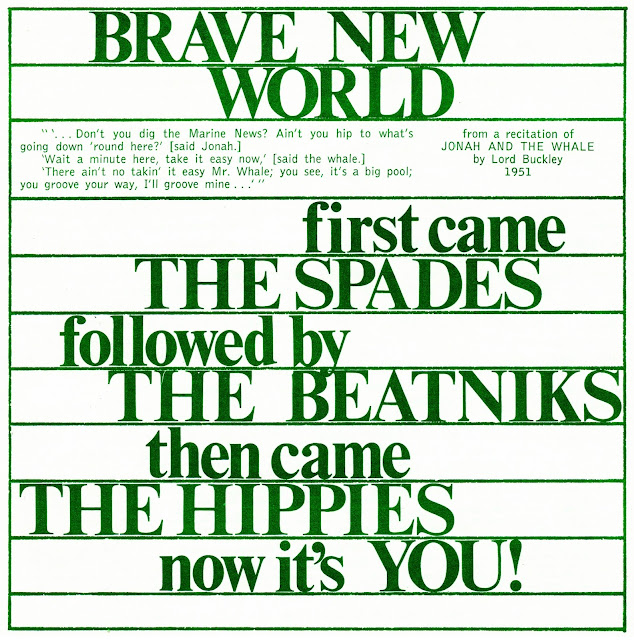 "The Evolution of The Hip" from the book Kosmon, by Don Robertson (1970)

Thank you Wikipedia and Youtube. How many people really realize what a revolution we have here with these two services?

NEXT on Psychedelic Daze is "Harbinger and the Dawn Album"

Posted by Don Robertson at 3:20 AM No comments: