The 15th Century - Part Two
Continuing the story from the previous article in this series, I would now like to introduce two more famous composers from the early part of the 15th century. Their names are Gilles Binchois and Antoine Busnois. 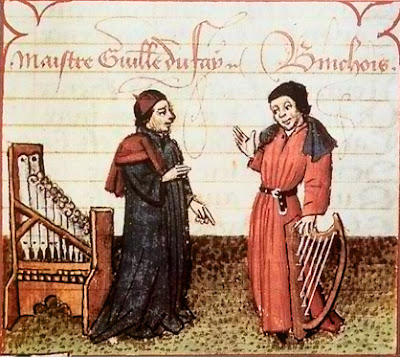 Dufay and Binchois were represented in "Le Champion des dames," a poem by Martin le Franc (1410-1461) who penned the phrase contenance angloise, a term that affirmed that these two composers were inspired by the British composer John Dunstable who was the first composer to create the sound that dominated 15th-century music.

Gilles Binchois was one of the most famous of the Franco-Flemish composers from the first half of the 15th century. He wrote secular songs of the highest order, and liturgical music as well. Little is known of his life, however.

"De plus en plus" by Gilles Binchois

Antoine Busnois (ca 1430 – 1492)
The secular song tradition that Binchois and Dufay (Part 4 of this series) began was continued by Antoine Busnois who, like Binchois, became very famous for his songs. His liturgical music, like Dufay's, filled European cathedrals of the time.

The Mass
When we refer to a "mass" in Western classical music, we are referring to a setting of the five parts of the ritual of the mass in the Roman catholic church. These are the sections of liturgy that are present in almost all celebrations of the mass: the "Kyrie," the "Gloria," the "Credo," the "Sanctus" (and the connected "Benedictus") and "Agnus dei." Together these five liturgical texts are called the ordinary of the mass. This is invariable except for particular services such as those during holy week (the week before Easter) and in the celebration of the requiem mass (for the dead), which is a special kind of mass.
When we listen to a "mass" composed by composers from the 14th century forward to the present day, it is usually these five separate liturgical texts sung in Latin (kyrie is a Greek word, however), set to the music from a particular composer, be he Machaut, Dufay, Palestrina, Monteverdi, Bach, Beethoven or even 20th-century's Igor Stravinsky. Renaissance composers started a trend of composing sets of five mass movements that contained similar musical material, to create unity among the five parts.
During the past few centuries, the five mass movements together have become recognized as a complete musical composition using the name "mass." However, during the Renaissance period, composers created settings of the five mass movements to be included as a part of an overall liturgical service, a service that also contained prayers, lessons, and a reading of the gospel in addition to other parts, much of which were sung in Gregorian chant. The mass movements at that time were not performed outside of the surrounding liturgical service.
During the 15th century, some very beautiful settings of the five sections of the mass ordinary were composed. During the following 16th century, composers will create a very large number of masses. The great 16th century composer Palestrina, who perfected the polyphonic mass, composed over 100 masses, a feat comparable to that of the great 18th-century composer Joseph Haydn who, while perfecting the symphonic and sonata forms, wrote 106 symphonies.
I am a composer of a mass that I call "The Jubilation Mass," and it has its own website (JubilationMass.com). I wrote a multi-part article called "The Mass Through the Centuries" and I have hosted it on that site. I recommend reading that article if you are interested in more information about mass composition from the 15th century forward.

The Motet
The motet is an harmonic liturgical music composition that was, like the mass movements, sung as a part of various services, replacing Gregorian settings of music for graduals, introits, offertories, antiphons... music that constituted the proper of the mass, and Gregorian chants sung in other services such as matins and lauds. The earliest extant motets were composed during the 13th century, when music was evolving from the earlier "organum" forms that I described in the second article in this series.
Early fifteenth-century motets were mostly isorhythmic, employing repeated rhythmic patterns in all voices... patters that did not necessarily coincide with repeating melodic patterns.

The Cantus Firmus
As I explaned in the second article in this series, when composers began creating sacred music in an harmonic style, such as the organum, harmony parts were added to an existing Gregorian melody. This melodic line appeared as one of the parts, often in long note values, and provided a basis for music composition. It was called the cantus firmus (fixed melody) in writings dating from as far back as 1235.
During the 15th century, the cantus-firmus provided the basis for motet and mass composition. By this time, however, secular melodies that were already beloved by the public also began to be used as a cantus firmus melody. 15th-century composers even employed popular songs as the cantus firmus for compositions sung during the singing of the mass, something that will eventually become an issue with the folks at the vatican. The most famous example is the melody "L'homme arme," a French dorian-mode secular song from the same era, whose melody was put to use by a number of composers as a cantus firmus, even including a young 16th-century Palestrina. The most famous example where this melody is employed as cantus firmus is the beautiful mass composed by Guillaume Dufay called the "Missa L'homme arme." There are over 40 different settings of the mass ordinary in existance, however.

Thanks to the wonder of technology, my readers, even those with only a rudimentary understanding of written music, can watch the following video, where the music score is synchronized with the music, and get the point that I am making about how a cantus firmus is integrated into a musical composition. In this video, the choir first sings the popular song "L'homme Arme" to familiarize you with the tune. Following this is the first movement of the mass, the "Kyrie." In the 5th measure, the melody, an embellished version already hinted at by the sopranos, is sung by the tenor voices. You will see the words "L'OMME L'OMME" in the score, indicating where the old secular melody begins (the "H" in l'homme is not pronounced). After this, there is a pause in the tenor voice as the music continues, and then the melody in the tenor continues for another few measures. The tenor voice works with the melody of the song throughout the mass. The words that are set to this melody are the liturgical words, not the words of the song:


Fauxbourdon
If you are new to 15th-century music, and specifically to the century's most famous composer Guillaume Dufay, you may sometimes feel the cold-as-steel-like quality in some of the music, showing its roots in the older style from the preceding century, where the focus was on the musical intervals of the 4th and 5th: the underpinnings of all harmony (see my book The Scale for a detailed explanation of this). This is especially evident in the 15th-century musical style known as fauxbourdon that Dufay used for the setting of hymns.
At the beginning of the 15th century, as the Renaissance started to flower, English composer John Dunstable's influence caused the introduction of the 3rd and 6th musical intervals to become a part of European music composition, thus completing the musical triad, allowing perfect musical harmony to resonate from the halls and cathedrals of Renaissance Europe, as explained in Part 4 of this series.
The purpose of this type of harmonic innovation was to allow a more chordal setting of the melody. As an example, we turn to the famous Gregorian hymn dedicated to Mary, "Ave Maris Stella" (Hail, Star of the Sea"). Like today's hymns, those of the Renaissance contained poetic lines set to a repeating melody. Dufay's hymn settings alternated between the original Gregorian melody for odd verses and his own fauxbourdon setting for the even ones:
Hymn "Ave Maris Stella" with alternating verses composed by x G Dufay set in the 15th-century fauxbourdon style

Wikipedia defines fauxbourdon as: "In its simplest form, fauxbourdon consists of the cantus firmus and two other parts a sixth and a perfect fourth below. To prevent monotony, or to create a cadence, the lowest voice sometimes jumps down to the octave, and any of the accompanying voices may have minor embellishments. Usually just a small part of a motet composition employs the fauxbourdon technique [however, entire stanzas are set in Dufay's hymn settings].

"The top and bottom lines are freely composed; the middle line, designated 'fauxbourdon' in the original, follows the contours of the top line while always remaining exactly a perfect fourth below. The bottom line is often, but not always, a sixth below the top line; it is embellished, and reaches cadences on the octave." (Wikipedia)

*
And now at this point, we move ahead, toward the 16th century. In the next installment I will introduce the composers who followed in the footsteps of Johannes Ockeghem, whom we discussed in the previous article in this series, bridging the gap between the two centuries, moving toward the style that will dominate the 16th century - the golden era of Renaissance sacred music.