Digital Symphonies
The most important music that I discovered from listening to Steven Hill and Anna Turner's "Music from the Hearts of Space" radio show during 1980 was the amazing electronic music from Europe. I dedicate Part 4 of this series to that subject. I will only say that at this point in my narrative, I had realized for the first time that by my using synthesizers and electronic equipment, I could "orchestrate" the piano improvisations that I had been playing for six years. I have always visualized my music as orchestral from the time that I started composing music in my head as a small child.
As quickly as I could, I put together an electronic music studio in our Santa Rosa bedroom. I began by buying a minimoog synthesizer from my friends, the duo Emerald Web. They were a part of the burgeoning new age music scene in the Bay Area. 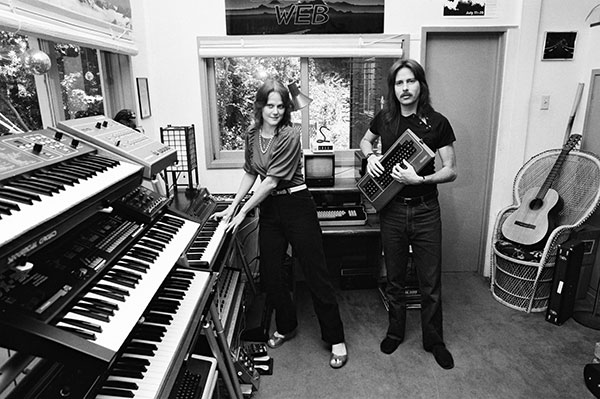 Valley of the Birds, by Emerald Web

I also purchased a small Roland string synthesizer to create sustained chords to provide a smooth string-like chordal sound. With it and my minimoog instruments in conjunction with my Revox reel-to-reel tape recorder, I immediately created two spontaneous pieces of music, one of which I later released on a compilation called Favorites. It is called "Cry of the Infinite." I have recently made a video using that piece of music:

Cry of the Infinite, by Don Robertson

Resurrection
Next, I purchased a professional 8-track tape recorder to enable me to overdub different tracks, and an Oberheim sequencer that I could use to create repeated note-patterns. I then set to work on my first synthesizer album called Resurrection. I worked on it for six months.
I learned a lot making this album, as I had no previous experience in recording, mixing and mastering music, let alone producing cassettes. I joined the Audio Engineering Society and went down to Los Angeles to attend conventions where I would learn from professionals.
When I had completed the album, I was unsure of the final result and asked Michael Sterns if he would remix the album properly for me, but he told me the tape sounded fine. And so Resurrection became the first album on my new DBR Music cassette label.
Resurrection landed like a lead balloon in the "new age" market. I sent it to a magazine called "New Age" but their review was not very favorable. However, in England it became a sensation in the synthesizer music field and Resurrection entered the top twenty on the synth music charts, inspiring the successful UK composer Clifford White to change his career and become a synthesizer musician.
My friend, the great visionary artist Brian MacGovern, had created an amazing cover for the album, but I received so many complaints about it, and because I wanted to sell the album in my own country, I changed the cover to a banal nature photo. Still, this album wasn't making it in America.

Side One of the Cassette "Resurrection"

The Genre Starts to Take Off
Ethan Edgecombe, the new age music distributor, was very aggressive and was now selling music recordings not only in metaphysical bookstores, but in places like Star Magic that had two stores that sold space-related gifts. One was in San Francisco and the other in New York City.
He was setting up special displays and really marketing the product, and people began buying this new music. Because the stores were gradually being tagged with the "new age" moniker, the music was being called new age also.

Constance Demby
Constance Demby moved to the San Francisco area from Boston, and we began doing concerts together in the Bay Area. She would perform her music with a number of exotic instruments, some especially made for her like her "space bass," the large metal structure behind her in the photo below. 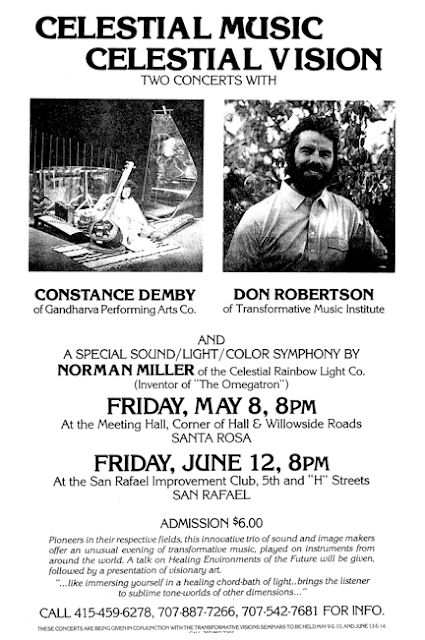 I introduced Connie to Stephen Hill and Anna Turner of Hearts of Space, and Anna helped her create an electronic album called "Novus Magnificat." The album was released in 1986 on a new "Hearts of Space" record label created by Steve and Anna. It ended up selling over 200,000 copies.
Novus Magnificat, by Constance Demby

Inner Sanctum
The artist Aeoliah, whose painting I had used on my Celestial Ascent album, wanted to become a recording artist. He wasn't really a musician, but he could play a few chords on the keyboard, and so he and I recorded an album of music in my bedroom studio. On this album I recorded one of my piano improvisations for the first time. This album, called Inner Sanctum launched Aeoliah's career and he became one of the highest-selling artists in the new age genre.

I traded my work on Aeoliah's album for his original painting called "Rainbow Ray." It's hanging in my studio. 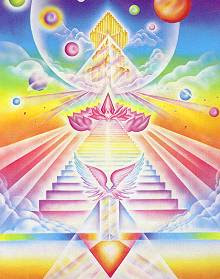 "The Rainbow Ray" by Aeoliah

Song of the Reed
I also recorded a song "Shower of Nectar" with Steve Coughlin in my home studio. Ethan Edgecombe had started his own record label, called Fortuna records, and this album was one of his first releases.

Shower of Nector, by Steve Coughlin and Don Robertson

As sales of new age music began to take off, other distributors entered the fray. Vital Body Marketing and Narada were the second and third new age distributers to emerge.
My Favorites

In the next installment, Part Four of Genesis of New Age Music - The European Composers