The Historic Cycle of Music and Art

The Historic Cycle of Music and Art
by Don Robertson

Are there really cycles in history, where societies continually go through the same cultural progression and regression as had similarly taken place in previous societies? Some historians believe this to be true. In this article, I show how, beginning in the 1960s, I began looking into this cyclic re-ocurrance of historical tendencies as it related to the classical music of our Western world. Enjoy.

Music Through the Centuries
I wrote the book Music Through the Centuries in 2005 and embedded it in my DoveSong.com website. I have not yet re-published the book in hardcover. Instead I am re-using the material in that book for "Music Futurist" blog posts, expanding the information and bringing it up to date.
The premise of Music Through the Centuries is that each of the last seven centuries has had its own style of classical music. I'm convinced that this century-by-century stylistic change is a part of a reoccurring cycle, although I do not yet fully understand how these centuries fit into the larger picture.
I first started to think about cycles that covered long historical periods back in 1961, when I first wrote about the concept of cycles relating to the history of art. That year I had been reading the work of James Joyce. Through Joyce I discovered the philosopher Giambattista Vico, who in 1725 wrote Scienza Nuova (New Science), a book that has been highly influential in the study of the philosophy of history. Vico believed that history repeated itself in cycles, a concept that fits nicely with the ancient teachings of an astrological "great year."
I was in Mexico riding a bus in 1969 when I first began making notes for a new cycle concept. I published my findings in my 1970 book Kosmon. The following is the drawing that was featured in that book: 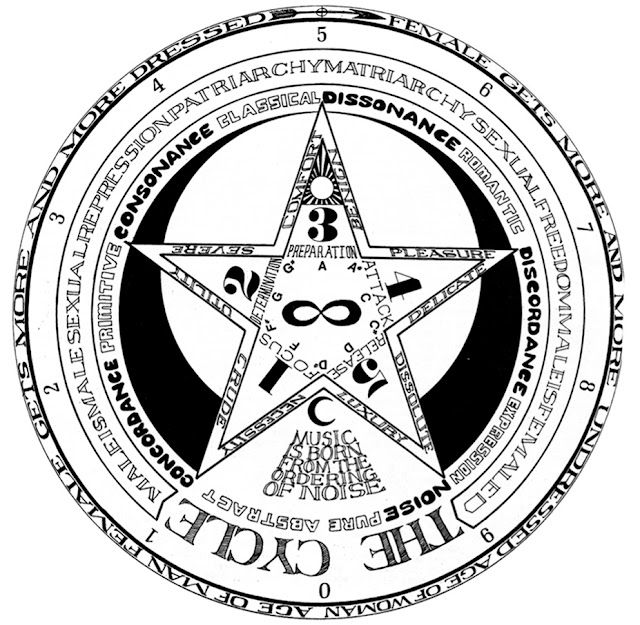 "The Cycle" from Kosmon, by Don Robertson (1970). Drawing by John Fresques

Studying Vico, I was fascinated by his ideas about "the re-occurrence of nations in cycles." He was not describing an exact repetition of history itself, but the re-occurrence of sociological tendencies that guided the course of man throughout time (hey, astrology again). It has been said that history doesn't actually repeat itself... it just rhymes.
As I mentioned, I had been thinking about Vico and about cycles already for eight years, and this had just been making sense to me. The idea of reoccurring cycles really isn't far fetched. Nature unfolds in yearly seasonal cycles, and I have already mentioned the cycle of the great year, the roughly 24,000-year procession of the equinox.
Vico describes the historical cycle as being divided into five positions:

1) First men feel necessity
2) They then look for utility (usefulness)
3) Next they attend to comfort
4) Still later they amuse themselves with pleasure
5) Finally they grow dissolute in luxury, becoming mentally unstable and wasting their energies.

1) CONCORDANCE – All the intervals are acoustically correct, as were those in the modes of ancient Greece and Egypt.
Monks of Santo Domingo de Silos

2) CONSONANCE – Slight alteration in pitch and scale as during the time of J.S. Bach when new tunings for the keyboard were introduced to make accommodation for what today Western musicians call harmony (which is actually a system of harmony based upon modulation).
Corelli's Christmas Concerto

3) DISSONANCE – Wide use of dissonant intervals as during the time of Beethoven. During this period, music was frequently using such long-restricted intervals as the infamous “devil’s Interval” (the tritone (C to F#), that had been prohibited during the Middle Ages) as a part of a system of harmony that was based on a dissonantly tuned keyboard.

4) DISCORDANCE - In this period, music is based on discords. This type of music began to be written during the first part of the 20th century by composers who today are considered by the academic-music community as “modern masters,” the foremost being Arnold Schoenberg:

5) NOISE – An era that began in the 1940s was initiated by composer John Cage. He declared that any kind of noise should be considered to be music. In other words, any kind of sound was music and there was no distinction between, say, the sound of machines in a factory or a Beethoven symphony. This fifth position on the cycle represents the complete dissolution of music itself.

In the article accompanying the cycle drawing in the Kosmon, I wrote about how various social systems around the world were acting out the parameters of any one of the five parts of this cycle and how our classical music has played a part in the overall operation of the cycle enacted by our culture.
For Position 4, the goals of the society are pleasure, and when large numbers of European society moved from a more balanced position to seek pleasure for pleasure's sake, this was reflected in the classical music of Viennese composer Arnold Schoenberg, whose influence during the first half of the 20th century caused a change in the prevalent and accepted style of contemporary classical music, allowing the music to become more discordant..
During the second half of the 20th century, we have the influence of Schoenberg's aforementioned student John Cage, who proclaimed that all sound and every noise conceivable was a type of music. This cagey guy ushered in Position 5, when music (yes and art also) entered its final dissolution, where culture found itself adrift in a sea of not knowing its true nature and its true purpose.
At the end of Position 5, the cycle terminates with a huge transformation back to the beginning of the cycle, to Position 1 in a new iteration. This shift from 5 to 1 is not a smooth, slowly evolving transition as were the others, but is in fact, a collapse of the socioeconomic system, which has grown so corrupt and dissolute that only a very devastating solution can cause a spoiled society to turn from a life where every kind of excess is available, to a life based on the most basic of needs: food, water, clothing, love and spirituality. It is during this shift from the end of one iteration of the cycle to the next, Vico said, that a society that was based on the lowest common denominator (a "godless" society, where all people and all acts are considered to be equal in a "spirit of tolerance," where there are no true heroes, and where all ideas, acts, and things are acceptable) collapses and the people must turn to spirituality as their only recourse. This is also the time when music fully changes, for during a time of necessity, discords are out of place.
Having understood all of this back in 1969, and recognizing that a collapse was guaranteed at some point in the not-too-distant future, I sang about the situation in this recording of my song "Heavy Trip," recorded at Mercury Records in San Francisco during that year:
"Heavy Trip," by Don Robertson (1969)

And so, there you have it. I hope that you give some thought and consideration to an idea that I had in 1969, and still consider valuable today.