This is Part 5 of my 12-part series on the San Francisco countercultural movement of 1965-1969 that created a revolution in music and culture. I was a part of that movement, recording my album Dawn for Mercury Records in San Francisco in 1969.


The future of music depends on our knowledge of the important musical traditions of the past.

Trips Festival 1966
The Trips Festival was held at the Longshoreman's Hall in San Francisco in January 1966. It was a three-day event that, in conjunction with The Merry Pranksters, brought together the counterculture movement. Ken Kesey and the Merry Pranksters lived communally at Kesey's homes in California and Oregon, and were noted for the sociological significance of a lengthy road trip they took in the summer of 1964, traveling across the United States in a psychedelically painted school bus called "Further."
The Trips Festival had been organized by Stewart Brand (who later published the Whole Earth Catalogue), Ken Kesey, Owsley Stanley, Zach Stewart and others. Ten thousand people attended this sold-out event with a thousand more turned away each night. On Saturday January 22, the Grateful Dead and Big Brother and the Holding Company came on stage and 6,000 people arrived to imbibe punch that had been spiked with LSD, and to witness one of the first fully developed light shows of the era. There were also performances by Jefferson Airplane, The Charlatans and The Great Society. (Culled from Wikipedia). 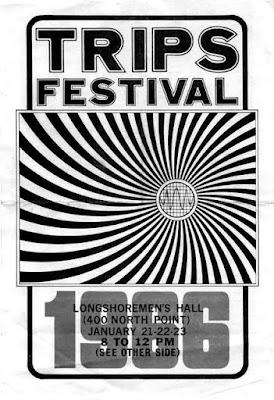 The Week of the Angry Arts
This The Week of the Angry Arts poster was used to promote a concert to benefit the spring mobilization to end the war in Vietnam. The concert at Longshoreman's Hall on April 9, 1966 featured some of the best bands in the area - Sopwith Camel, Quicksilver Messenger Service, Country Joe and The Fish and Big Brother and The Holding Company. As if that were not enough, the Grateful Dead was added at the last minute, with a sticker that stated this fact pasted to the already existing poster. 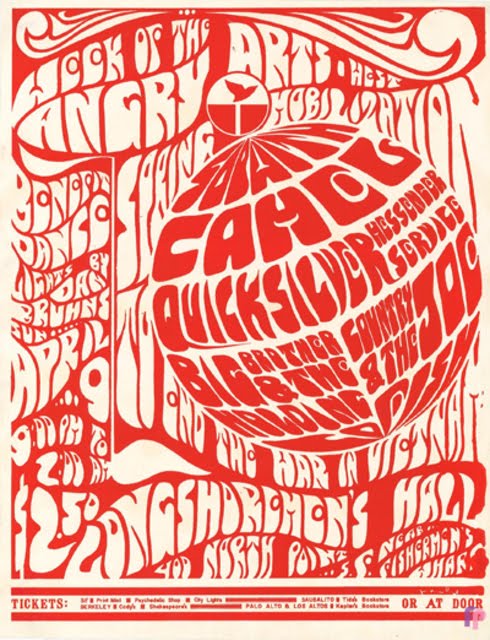 The Human Be-In
The Human Be-In of January 14, 1967 in Golden Gate Park, next to the Haight-Ashbury District, was attended by just about every member of the counterculture in the Bay Area. The musical performances were brief, as there were many speakers and poets, as well as the musicians. The Grateful Dead's brief half-hour set included Charles Lloyd on flute for "Good Morning Little Schoolgirl." 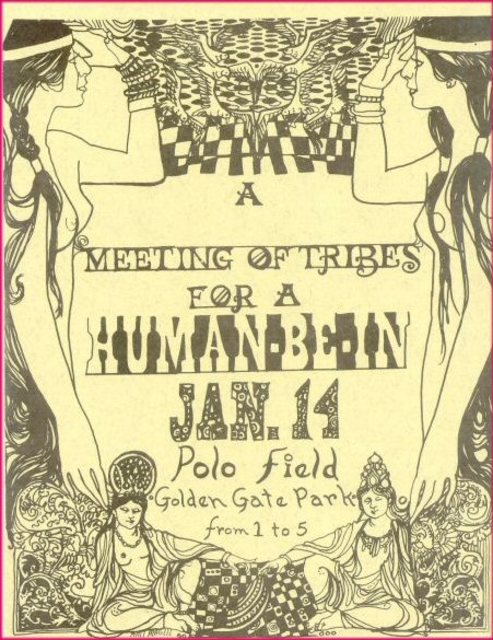 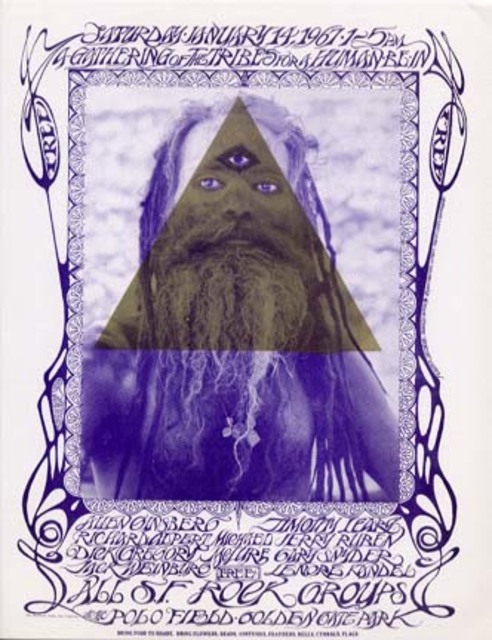 The Human Be-In in Golden Gate Park in San Francisco on January 14, 1967 is generally considered to be one of the most important events in the counterculture movement. It featured “All S. F. Rock Groups,” including the Grateful Dead, Big Brother and The Holding Company, Country Joe and The Fish, Quicksilver Messenger Service, as well as Timothy Leary, Allen Ginsberg, and Jerry Rubin. Several different posters and handbills were made for the event, with the one above being designed by Stanley Mouse and Alton Kelley.
Here is some rare live footage from the Be-in:

Mantra-Rock Dance
Mantra-Rock Dance was a counterculture music event held on January 29, 1967 at the Avalon Ballroom in San Francisco. It was organized by followers of the International Society for Krishna Consciousness (ISKCON). The Mantra-Rock Dance featured The Grateful Dead, Big Brother and the Holding Company, Moby Grape,  poet Allen Ginsberg. who led the singing of the Hare Krishna mantra onstage, and LSD promoters Timothy Leary and Owsley Stanley. 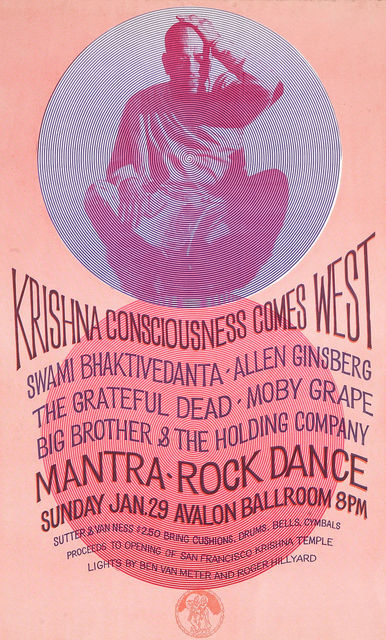 Captain Beefheart at America's First Rock Festival
The KFRC Fantasy Fair and Magic Mountain Music Festival was an event held June 10 and 11th, 1967 at the 4,000 seat Sidney B. Cushing Memorial Amphitheatre high on the south face of Mount Tamalpais in Marin County, California. At least 36,000 people attended the two-day concert and fair that was the first of a series of San Francisco area cultural events known as the Summer of Love. The Fantasy Fair was influenced by the popular Renaissance Pleasure Faire and became a prototype for large scale multi-act outdoor rock music events now known as rock festivals. 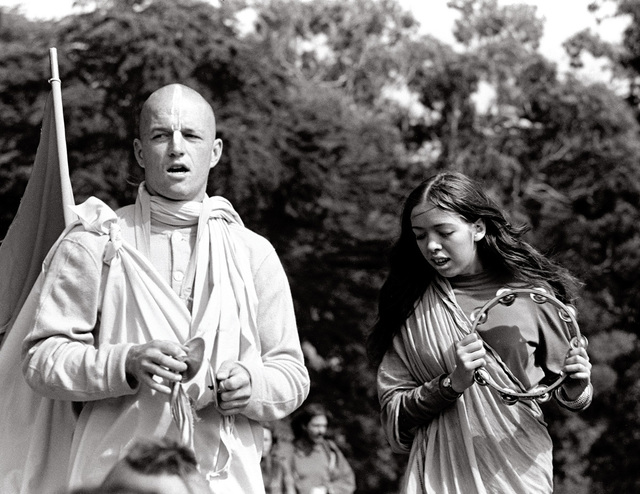 Members of ISKCON, known colloquially as the "Hare Krishna movement," chanting in Golden Gate Park in 1967. (Michael Ochs Archive - Getty Images)
"The Hippies" are featured in Time Magazine
The July 7, 1967 cover of Time Magazine, the most widely read news magazine in America, showcased an article on the emerging counterculture movement in San Francisco. The magazine's misuse of the term "hippie" to describe the movement helped cement the term into mass consciousness. "Hippie" had been first coined by San Francisco journalist Michael Fallon in the fall of 1965. The article in this magazine caused thousands of young people to stream into the Haight-Ashbury District in July and August, causing the members of the counterculture some concern. 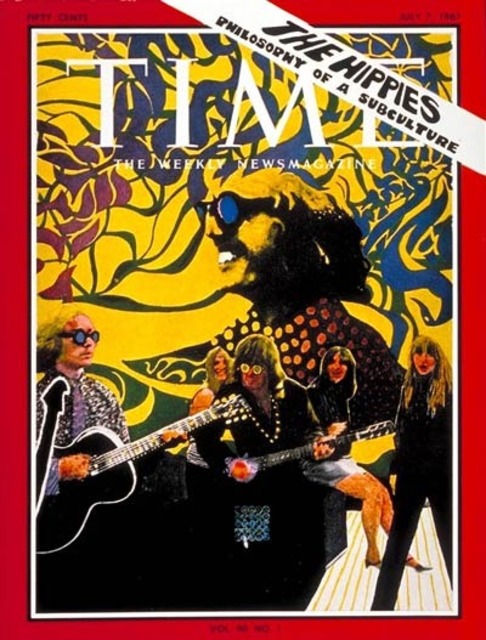 Pattie Boyd and George Harrison in San Francisco
In 1967, George Harrison with his wife Pattie went to visit Haight-Ashbury in San Francisco. “I thought it was gonna be all these groovy kinds of gypsy people with cool shops making works of art and paintings and carvings, but instead it turned out to be just a lot of bums... It wasn’t what I thought with all these groovy people having spiritual awakenings and being artistic. It was like any addiction. So at that point, I stopped taking [LSD] ... That’s [when] I really went for the meditation.” 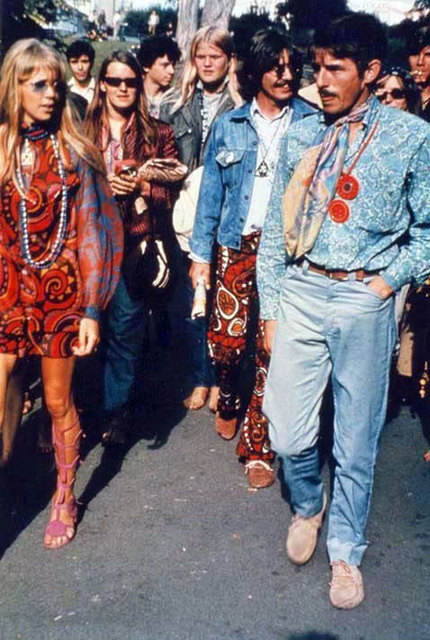 "The Death of Hippie" 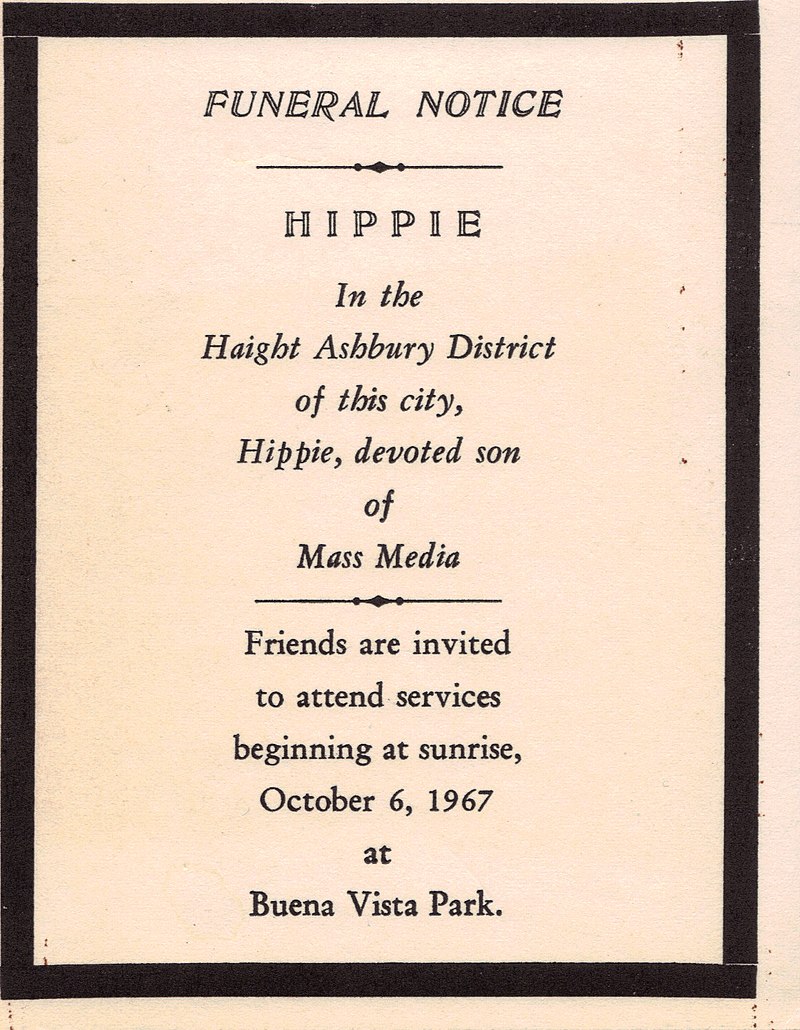 In “The Death of Hippie,” staged in the Haight Ashby neighborhood by the Diggers on October 6, 1967 as street theater, masked participants carried a coffin with the words "Hippie--Son of Media" on the side. This event was meant to mark the end of the era of Haight-Ashbury and was staged in such a way that any media outlet that simply described the happening would unknowingly transmit the Diggers' message that Hippies were a media invention and reflected in no way the tremendous cultural experiment that was taking place in San Francisco
https://en.wikipedia.org/wiki/Diggers (theater)

KSAN-FM
On March 18, 1968, revolutionary KMPX program director Tom Donahue turned in his resignation after a series of conflicts with station management. When this happened, another station, KSAN-FM, switched from classical music to freeform rock, hiring Donahue and most of the displaced KMPX staffers. KSAN became the new album-oriented rock station. Laid-back DJs at the station played rock album cuts, no matter how long they were, and featured Haight-Ashbury subculture heros like the locally famous spoksman, Travus T. Hipp.
We all listened to KSAN, which played full album cuts from all of the great albums of the era. My producer, Abe "Voco" Kesh was a DJ there, as well as Dusty Street, who was in the control room when I recorded my notorius "BOMB!" for the Dawn album that I will discuss in Part 12 of "Psychedelic Daze." "KSAN Jive 95: The Movie" is the definitive film documentary on the San Francisco progressive rock, free form radio station that changed the world! KSAN Jive 95 was founded by radio legend Tom “Big Daddy” Donahue in May of 1968 right after the Summer of Love and at the escalation of the Vietnam war. The 10 year Jive 95 period was pivotal in the formation of many new concepts and ideas not only about radio, but about the culture of the time. KSAN Jive 95 spoke to a new generation of radio listeners and the San Francisco Sound of music was the soundtrack of people’s lives.

The Radio Station that Changed the World Trailer (2017)

The San Francisco Peace March
There was a tremendous march against the Viet Nam war in 1969. I was a part of that march. It wasn't a "bunch of hippies," but included people in suits and all kinds of "normal" attire. The march ended up in Golden Gate Part where reportedly 100,000 attended the Peace Rally in the Polo Fields of the Park. This took place on November 16, 1969. It was an event not to be forgotten. Crosby, Stills, Nash and Young performed "For What It's Worth," "Find the Cost of Freedom," and "How Have You Been." 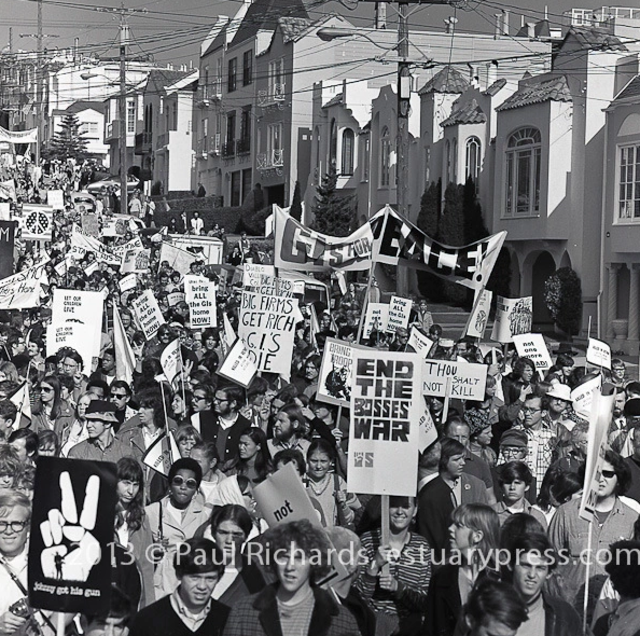 ...And the Peace Rally in Polo Fields in Golden Gate Park 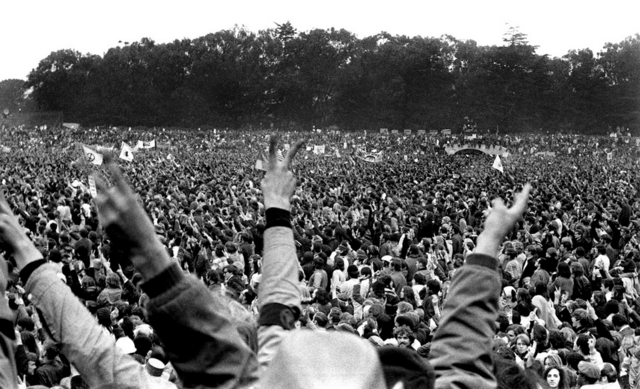 Next in the series "Psychedelic Daze" is Part Six - "The Promoters and their Venues"
Posted by Don Robertson at 7:48 AM No comments: