Welcome to the first article in my series The Sacred Choral Music of the Renaissance. This series of articles featured on The Music Futurist is one of the most important that I will publish, as it covers one of the greatest music traditions that the people of our planet have ever produced, and I don't say this lightly.
The great works of music from the European Renaissance period spanning the 15th and 16th centuries are a major part of the European classical music tradition, just as the music of Beethoven and many other great 19th-century composers represent the classical music of that century.
The fact that classical art music thrived before the time of Johan Sebastian Bach (who died in 1750) hasn't been generally understood or accepted. Our culture that has been erroneously taught that we always advance culturally through time, has been locked into an historical cycle that has moved further and further away from the spiritually rich consonant harmony of the Renaissance period, finally plunging into the polluted waters of discordant harmony, the so-called "modern" music that arose during the troubled 20th century (for more about this cycle, see my article "The Historic Cycle of Music and Art").

The DoveSong Editions
I first discovered Renaissance sacred choral music back in 1971. It was a discovery that changed my life and my musical direction. Within months, I began a life's project hunting through musty libraries in American universities, researching this newly found treasure. I then began creating music scores in modern notation with a plan to publish editions of this music to help raise awareness of a vast music treasure of true importance, and to provide modern study and performance editions. I am still in the process of creating what will become the DoveSong Internet University Editions.
I view this ongoing project of mine as something that will be a necessary contribution to our culture that, in its anxiety to move through the age of reason and the industrial age, had abandoned and forgotten the large body of great music composed by 16th-century master composers who were equal in stature to luminaries like Bach and Beethoven, and whose music manuscripts and early printed editions were lying dormant in monasteries and cathedrals throughout Europe. Very few performances of Renaissance sacred music were available during the 19th and 20th centuries, and that is one reason why the general music-loving public knew little or nothing about this lost genre.
For over twenty years, I developed my Renaissance sacred choral music educational publication project that I had started in 1971. I transcribed ancient printed music scores into scores using contemporary notation by hand, adding the Latin words with a typewriter. Here is an example: 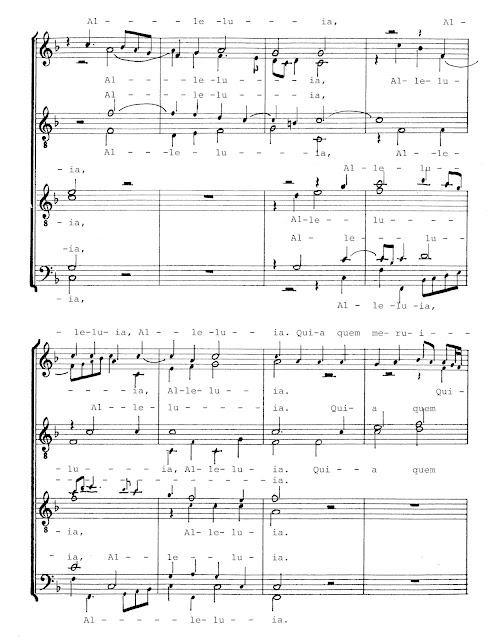 During the 1990s, I began creating study scores of music from other centuries, starting with an even more forgotten century, the 17th, and moving on to the important classical music composers from the 18th and 19th centuries, and these have become a part of the DoveSong publication project, focusing on the great works of spiritually and emotionally elevating works of great Western musical art, creating study editions using a color-coding technique that I had invented to better illustrate melodic development and contrapuntal techniques. 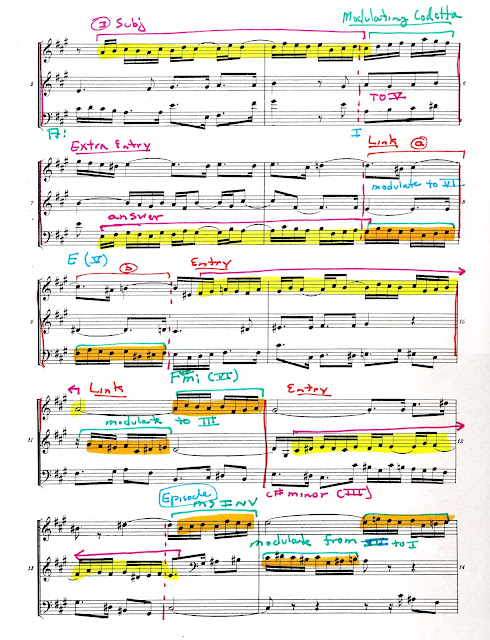 In my search for music that exhibited genuine spiritual qualities, I fully recognized how important music was for the health of humanity during difficult times, and how the re-introduction of the amazing and important consonant spiritual classical music from the centuries before the 20th-century onslaught of discordant classical music would be a necessity during the transitional time that I knew we were facing, and that is upon us now.
Folks, it's just a matter of putting a toe in the water to see if it is good to swim in. If someone is ready for it, then it will be ready for them.
And now some background information about this great sacred choral music from the Renaissance era.

Dark and Golden Ages
After the fall of the Roman Empire in the fifth century, Europe entered a period that has been referred to as the dark ages. There was a reason for the term "dark." After the fall of the Roman empire, life in Europe became pretty grim. The last century of the "dark" age period, the century before the beginning of the Renaissance period in 1400, was a time of great darkness in Europe. There were terrible famines and plagues during the 13th century, finally culminating in the Black Death of 1348 that took out about half or more of Europe's population. 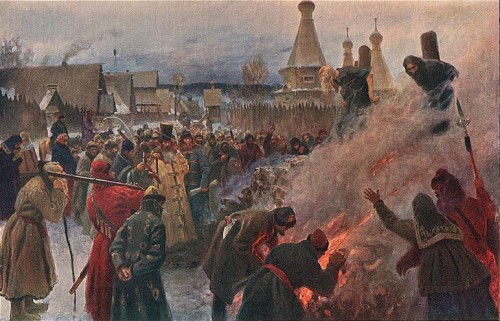 While this period of the dark ages was taking place in Europe, an Islamic Golden Age was occurring to the East, centered in Baghdad. This had begun in the 8th century and lasted until the Mongol conquest of Baghdad in 1258. 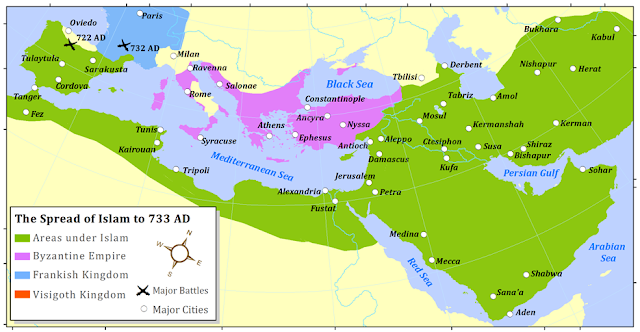 This is what the Meditarranian Region looked like in 733. Moslems now ruled the green areas

The brutal Muslim invasion forces that conquered so many countries and enslaved, raped and murdered so many people on one hand, seized and brought back to Baghdad important manuscripts and books on the other. These treasures of knowledge then were translated into Arabic and studied in places like the "House of Wisdom," an important cultural center in Baghdad.
The House of Wisdom was a center for science, mathematics, astronomy/astrology, medicine, alchemy/chemistry, zoology, geography and cartography. The main texts that were studied were from India and Greece, but Syriac and Persian texts were also delved into. By the middle of the ninth century, the House of Wisdom housed the largest selection of books in the world.
A new writing system and the introduction of paper from China had facilitated the assimilation of the world’s great knowledge. Islamic scholars translated all of the important texts that they had found into Arabic. They further developed this knowledge, creating the great body of philosophy, art, poetry, astronomy, mathematics, music, medicine and science.
To the East, the brutal Muslim conquest of India witnessed a terrible bloodbath of slaughter and rape. 15th-century Indian historian Firishta wrote that 400,000,000 Hindus had been killed in this awful vanquishing. But the merging of cultures brought about another great music tradition. This occurred during the reign of Akbar the Great who ruled a large area of Northern India during the entire second half of the 16th century: 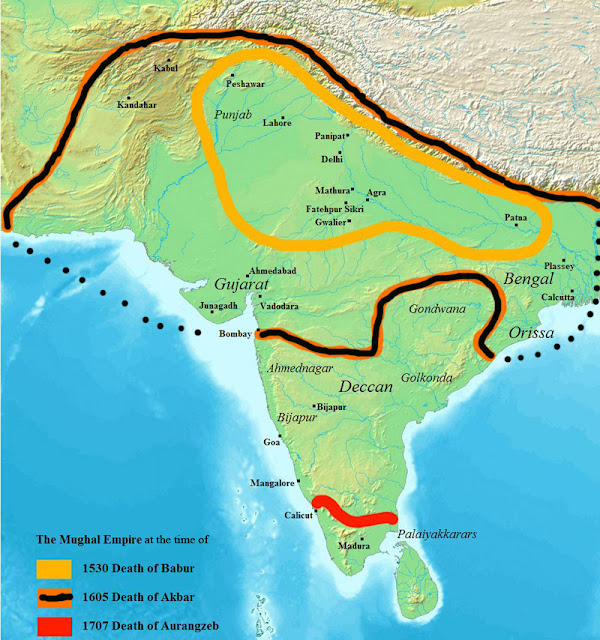 Akbar the Great's area of rule in North India, Pakistan and Afghanistan delineated in black

Akbar believed in merging the ancient Hindu culture already present in India, a culture that was most likely based on pre-antediluvian knowledge, with the mystical side of Islam called Sufism that had been introduced by Islamic invaders. This fusion of cultures resulted in the great classical music of North India that I will be covering extensively in articles in this Music Futurist blog.
A blossoming of new music spanned the second half of the 16th century simultaneously in North India and in Europe, resulting in the creation of two of the greatest of music traditions of our planet.


Al-Andalus
In 711, a force of Berber soldiers entered the Iberian peninsula from North Africa, took over the decaying cities of the Visigoths, and established the state of Al-Andalus. This Islamic state consisted of today's Spain, Portugal and Andorra, and also included a portion of France for a time. 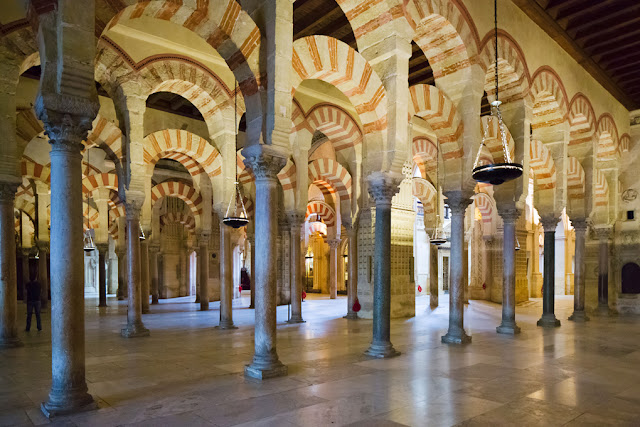 The Mosque of Cordoba, Spain

While turmoil and darkness ruled Europe, the glorious Islamic Golden Age spread to Al-Andalus from its center in Baghdad, and it flourished there. The capitol of Al-Andalus' was the beautiful city of Cordoba, where homes supplied with running water lined paved street-lighted roads, and where food was wholesome and plentiful.

The Libraries
Al-Andalus had over 70 libraries. The royal library in capitol city of Cordoba held hundreds of thousands of books, and at one time employed 500 people. Its catalogue alone consisted of 44 volumes. Muslim armies had taken control of many great cities in their path of conquest. The libraries in these cities were raided and books containing knowledge and poetry were taken back to Baghdad to be translated into Arabic. These Arabic translations soon made their way into the libraries of Cordoba. Thus Islamic scientists and scholars gained a fantastic knowledge of philosophy, science, medicine, music and mathematics, continuing to further develop these subjects.
Meanwhile in Europe, all cultural vestiges of the Roman Empire had disappeared and availability of ancient texts was almost non-existent. Books that had been preserved in monastery libraries were closely guarded, barred from availability to outsiders.

After the fall of Cordoba in 1032, books from the city's libraries were transferred to the city of Toledo, where culture continued to flourish. When the Christian King Alfonso VI of Castile invaded Toledo from the North in 1085, he recognized that Toledo had become a great center for science, medicine, astronomy, music, poetry and the arts. Instead of pillaging the great city, he allowed it to continue flourishing, encouraging the Islamic culture to further expand. Toledo thus became a great center of culture and learning.


The Toledo School of Translators
During the 12th and 13th centuries, groups of Jewish, Muslim and Christian scholars who were collectively known as the Escuela de Traductores de Toledo (the Toledo School of Translators) worked tirelessly translating the great philosophical and religious works contained in Toledo's libraries from Arabic into Latin, and finally into Castilian, the later helping to establish the foundation of the modern-day Spanish language.
The texts of the ancient Greek Philosophers, mathematicians and scientists, including among them the works of Plato, Aristotle, Hippocrates, Galen, Ptolemy, and Pythagoras were carefully translated from Arabic to Latin, the formal language of Europe.
Toledo was a remarkable center for learning. The city attracted scholars from not only the Muslim world, but from Europe as well. They poured into Toledo from England and Europe to study. These scholars then returned to their own countries with their newly found knowledge. This led to the expansion of knowledge in Europe and the development of three great universities: Oxford, the University of Paris, and the University of Bologna.
During the 11th and 12th centuries many scholars, including the important mathematicians Leonardo Fibonacci from Italy and Michael Scott from Scotland, who travelled to Al-Andalus to learn advanced mathematics. The works of the Islamic mathematician, philosopher and musician Al-Farabi, and Persian polymath Ibn Sīnā (also known as Avicenna), now translated into Latin, were used in works by such middle-age writers as Roger Bacon, Walter Odington, Jerome of Maravia, and Vincent de Beauvais.
The fuel for what would become the Renaissance was pouring into culture-starved Europe from the advanced Islamic culture thriving in Toledo. Of utmost importance was the arrival of Latin translations of the classical texts of ancient Greece – Plato, Aristotle and Pythagoras.

*
In the next article in this series, I will continue this discussion of Muslim influence in the creation of new music for Renaissance Europe, showing its impact on both instrumental and choral music.